The 1918 Prairie Farmer’s “Reliable Directory of Farmers and Breeders: Hancock County, Illinois,” which I recently purchased on on Ebay has arrived.

I searched it for numerous family members. Most were found, but there were a few exceptions. Instead of discussing them all, we’ll just look at my direct line ancestors who should have been in the directory:

My theories on the no-shows are:

It’s always good to contemplate reasons why someone is not in a record where they are expected to be. Contemplative ideas are not facts and should not be stated as such. However, I do include that speculation (clearly labeled as such) in my notes where I indicate the source did not contain the person of interest. 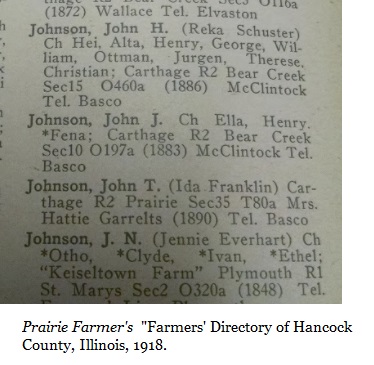 John J. Johnson owned 197 acres in section 10 in Bear Creek Township. He had a Route 2, Carthage address and had arrived in the county in 1883. He was on the “McClintock Telephone” in Basco. He had three children: Ella, Henry, and “Fena” (actually Tena). The * by Tena’s name indicated that she was no longer living at home. No wife is listed for John as his wife, Reka (Sartorius) had died several years earlier.

My Ufkes great-grandparents (Fred and Tena) are shown as renting 160 acres (the “T” indicates “tenant”) in section 24 of Bear Creek Township. The landlord for that property is John H. Ufkes. Fred is shown as having arrived in the county in 1893. In his case that’s a literal arrival–it’s the year he was born. For many of these farmers the arrival year is the year of birth. The year should be taken with a grain of salt as I have seen ones that are incorrect. Fred’s mailing address is Route 2, Carthage. The Ufkes family did have telephone through the Basco Exchange. Fred’s wife was Tena Johnson before she was married. She’s the “Fena” (with the *) listed in the entry for John J. Johnson discussed earlier. The Ufkeses had one child when the entry was compiled–John H.

Eielt Ufkes, Fred’s brother is also shown in the illustration. His entry is fairly straight-forward. The only differences are that he owns his farm of 120 acres. The children in the household include John Fooken. John was a nephew of Eielt’s that Eielt and Annie raised as their own child.

The directory also included additional directories of breeders of various types of livestock, owners of automobiles, and owners of silos. 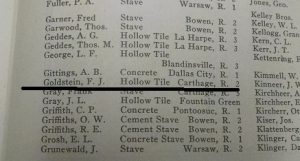 The information could just fall into the category of “general interest,” or may have some significance depending upon the situation and the family. The silo directory indicated the type of silo and the post office address of the farmer who owned it.  This may indicate the individual was running a large enough operation to warrant having one. F.J. Goldenstein was one of the few relatives of mine who had a silo in 1918.

I’m not certain how much information I can glean from the chicken breeder’s section of the directory, but at least it would let me know what the chickens looked like that my relatives owned. In this case, an asterisk indicated the person raised purebred stock for sale. But farmers owning chickens in 1918 was not unusual. The poultry section is the largest section in the livestock portion of the book.

This is a great directory. I just wish other places and time periods had them as well. 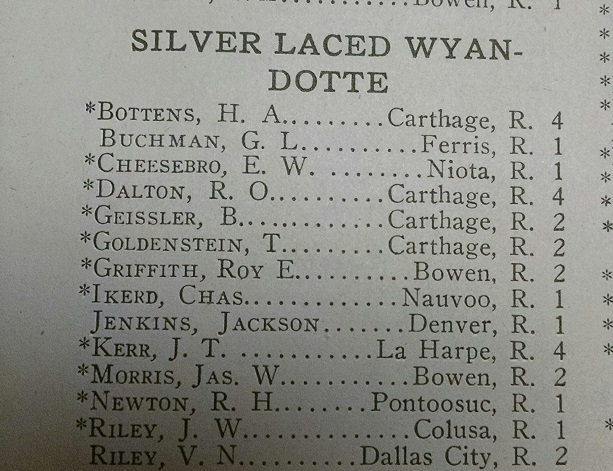