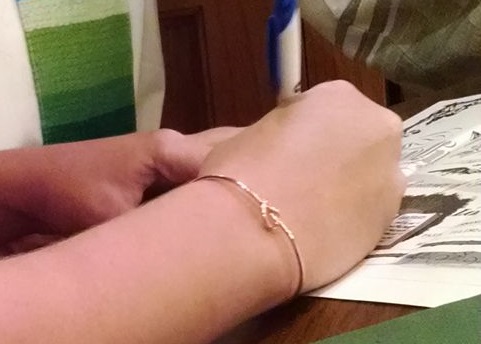 My daughter signing the witness portion of her sister’s marriage license.

I could not resist taking a picture of my daughter signing her sister’s marriage license as a witness to their wedding.

Really the maid (or matron) of honor and the best man do not need to be the two individuals who sign the document as a witness. Anyone who actually witnessed the wedding (and has no legal impediments to being a witness) could have signed as one of the two witnesses. The mothers of the bride and groom could have signed as could have two of the grandmothers in attendance. The ring bearer and flower girl could not have been a legal witness because of their age.  The best man and maid of honor signing as witnesses is a tradition but not a necessity.  It’s important to be aware of where tradition ends and legal requirements begin.

It’s also important to write things down as you remember them. I think in this picture my daughter is signing a “church certificate” of the marriage and not the actual license or record that is returned by the minister to the local clerk for filing. There’s a difference between the actual legal record and a souvenir document.