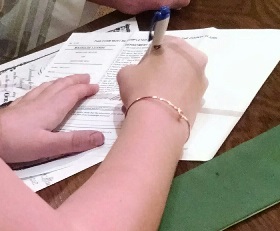 There are a myriad of genealogy lessons and reminders in this photograph. My discussion may be somewhat rambling…so bear with me.

There were several documents my daughter signed as one of the witnesses after her sister was married. While other documents may have sentimental value (which I’m not faulting), this is the one that really matters. It’s the license that will be returned by the minister to the county courthouse (in our case, that is the county recorder). It’s the official record of the marriage. If the records are preserved as they should be, it is the one document that should still be around (hopefully) in one and hundred fifty years long after we are all gone. Somewhere under my daughter’s hand is my name as father of the bride.

At least it better be there. I didn’t actually see the license, so I can’t testify as to what it actually says. Does it have my full name? Does it have just my first and middle name? Is my place of birth on there? If so, is it just the state; the county and the state; or the town, county, and the state?*  There’s a genealogical reminder there as well.

If we didn’t actually see what a genealogical record states, we never act like, suggest, or imply that we did. This picture shows my daughter signing the license. That may not be clear in the image used for this illustration, but in my personal copy of the picture it is clear the marriage license is what is being signed and whose marriage license it is. That’s another lesson:

My daughter knew what she was signing. It was in English and she reads English. My ancestors in 1876 signed an English language document when they only read German. There were mistakes in the document that resulted in litigation. Another lesson (that’s valuable in life and not just genealogy):

And clearly identify what an image is. I intentionally did not put a text box on this image indicating what it is. It’s not the marriage license. It is my picture of that license being signed by my daughter on 7 October 2017 at Immanuel Lutheran Church in Altona, Knox County, Illinois.

And it’s not the actual marriage record until it’s filed.

My daughter was not bothered by her father taking six pictures of her signing the marriage materials.  That probably makes a statement about one of us.

*-I’m just hoping that whatever amount of detail was required that they got it right. Maybe I should have looked at it.