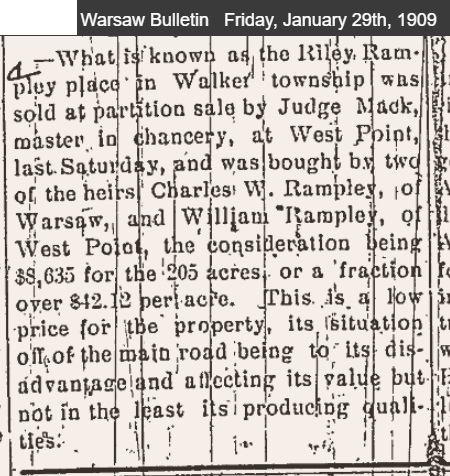 Real estate is often about one thing: location…at least on the surface. Genealogical research is never about one source.

The value in location was apparently true about the Riley Rampley farm in Hancock County, Illinois. At least that’s what the newspaper seems to be implying.

The Warsaw Bulletin mentioned the partition sale of the sale of Riley’s farm in January of 1909. I’ve known about the partition suit for some time and (other than the residences of the purchasers) all but the last sentence is information easily verifiable using court records. The newspaper would not be an original source for this information. The original source would be those court records.

It’s the last sentence that intrigues me.

This is a low price for the property, its situation off the main road being to its disadvantage and affecting its value but not in the least its producing qualities.

The farm is in the sticks. There’s no doubt about that. In fact, when Riley’s widow, Nancy, applies for a military pension there is information about the location of her farm in the application. The special examiner mentions the difficulty he had getting to the farm. The location of the farm could have negatively impacted its value.

The farm was owned jointly by the heirs of Riley Rampley–wife Nancy and their ten children. Nancy wanted to sell the farm and move to the nearby town of West Point. Had the heirs been in agreement to a price, they could have sold without court action and without a public sale. But they couldn’t.

Riley and Nancy’s youngest son Virgil was too young to execute a deed. They could not have arranged a sale among themselves even if they had wanted to. A partition suit was necessitated by Virgil’s age.

It’s easy to see how the scenario played out.

Nancy goes to the local justice of the peace, notary public, or someone else locally who “knows the law” and says she wants to sell the farm–perhaps to her two sons who have agreed to pay her a price the family agrees to. He tells her “Mrs. Rampley. You can’t sell the farm by yourselves this way. Virgil’s too young. The law won’t let him sign a deed. There ain’t no way you can do it without going to court.”

And so a partition suit is filed and the auction is the end result.

It’s also possible that other bidders at the auction are not seriously bidding against the Rampley brothers. It would not be unheard of for locals to not “bid against the family” in an auction of this type. Peer pressure can be a powerful force and the neighbors were probably well aware that the family’s only option was a public auction. Sometimes there are ways to slightly work around the law.

And the newspaper…it doesn’t tell the whole story.

Which is why we never rely on just one source.