Current genealogical theory indicates that an exhaustive search should always be performed as a part of the research process. I say…look at everything.

Goldenstein’s witnesses on the naturalization in Galesburg, Illinois, were J. T. Ehmen and E. Friesenborg.

A review of the church records of the Christ Lutheran Church in Gothenburg, Nebraska, contained confirmation entries in the confirmation register for a child of J. T. Ehmen and E. Friesenborg.

And guess where those children of T. Ehmen and E. Friesenborg were born in 1876? 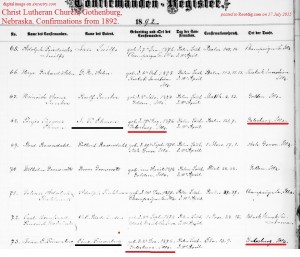 Galesburg, Illinois. The same place where Focke Goldenstein was naturalized in 1879. It’s not evidence that Goldenstein actually lived there in 1879, but it does indicate why he naturalized there–the men who vouched for him on his naturalization had children born in Galesburg in 1876.

Of course, just because Ehmen and Friesenborg had children born in Galesburg doesn’t mean that they lived there. I understand that. But they probably were living there in 1876.

This begs the question: how did Goldenstein know Ehmen and Friesenborg?

Because not only were they all on his Knox County, Illinois 1879 naturalization, they all were living in Dawson County, Nebraska, in the 1880s.

One doesn’t typically think of confirmation records of the children of the people of interest as providing significant clues.

That’s why I look at everything when possible.

Ancestry.com has digital image of some congregational records of the Evangelical Lutheran Church of America You can browse the list at Ancestry.com or view a PDF file on the ELCA website (all may not be on Ancestry.com) . The PDF file is easier to use, but  check the drop down list atAncestry.com to make certain the congregations of interest are included.