I agreed to help a cousin with her Daughter’s of the American Revolutionary War application for our common ancestor, James Rampley. James is a qualifying ancestor based upon his patriotic service during the American Revolution. Not bad for a man who was sent to the United States as a convict from County Suffolk, England, in the 1760s. Establishing James’ qualification is not the problem. Others have already established his service.

Like me, my cousin descends from James’ son Thomas Johnson Rampley. Thomas left his native Harford County, Maryland, for the wilds of Ohio in 1817. That’s likely where he died in 1823 leaving his wife Christianna with a family of children all under the age of twenty.

The problem was that we needed to show that Thomas was deceased for the DAR application–or at least find a document indicating he was deceased. That’s where probate records from Coshocton County, Ohio, came in handy. The probate records for Coshocton County are online at FamilySearch and at Ancestry.com. Because Ancestry.com has an index to the individuals whose estates are being settled, I decided to use it to find the first petition involving Thomas’ estate. That’s all I needed to establish his “dead by” date. I thought it would be faster.

Several entries appear for the last name of Rampley in Ancestry.com‘s “Ohio, Wills and Probate Records, 1786-1998.”As soon as I saw the entries, I was reminded of why I am not really happy about how Ancestry.com displays the results for these records.

The navigation of the results is probably the largest frustration for me. I understand the limitations of indexes and know that it’s just something I have to work around. 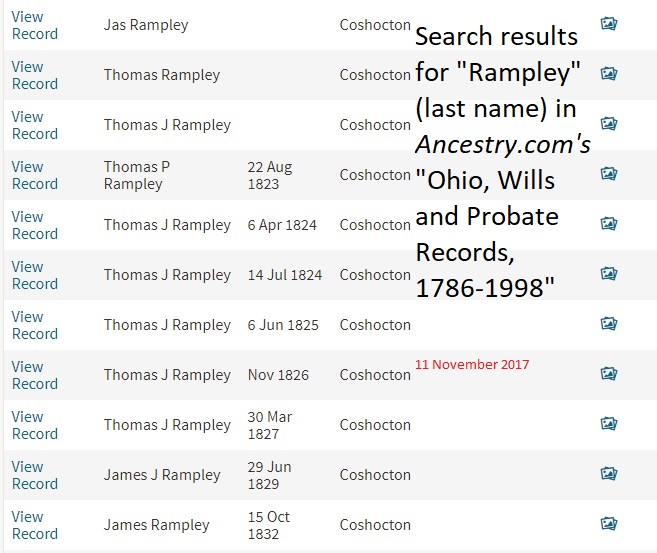 One of the entries for Thomas was not to an actual record in the book related to his estate but was to the page in the book’s own index (created by the clerk). In reviewing those page entries, I realized the first reference to Thomas likely was to the initial petition to adminstrate his estate.

On pages 376 and 377 of that record book was the petition I needed. It was the earliest document related to Thomas’s probate and helped to establish his death date.