I was only looking at the estate of Anna E. Trautvetter to see if there was anything “new” in it that I had overlooked. Anna was the wife of my uncle George Trautvetter and pre-deceased him in Hancock County, Illinois, in the 1920s. The only thing I hoped to garner from the records were an address for one of her children. There was no new address for her children.

Anna’s husband survived her and I was surprised that she even had an estate settlement. No real estate or chattel property appeared in the inventory of her estate. She had no will. Her husband was appointed administrator of her estate.

Then I saw why there was an estate settlement.

There was $5400 in mortgages and government bonds that appeared in an inventory filed on 23 September 1920. Anna had money in her own name and it needed to go through probate. That answered the question of why there was an estate settlement.

Two individuals mortgaged property to secure loans from Anna. One’s name appeared to be a Clark Johnson. While I have Johnson relatives, Johnson is a common name and I did not give it too much thought. My great-grandmother’s maiden name was Johnson (actually Janssen), but her family lived south of the Hancock County seat of Carthage-generally north and east of Basco.

In reading through the rest of the probate papers in hopes of locating something related to Anna’s children, I found a typed court order that listed the mortgages held by Anna at her death. 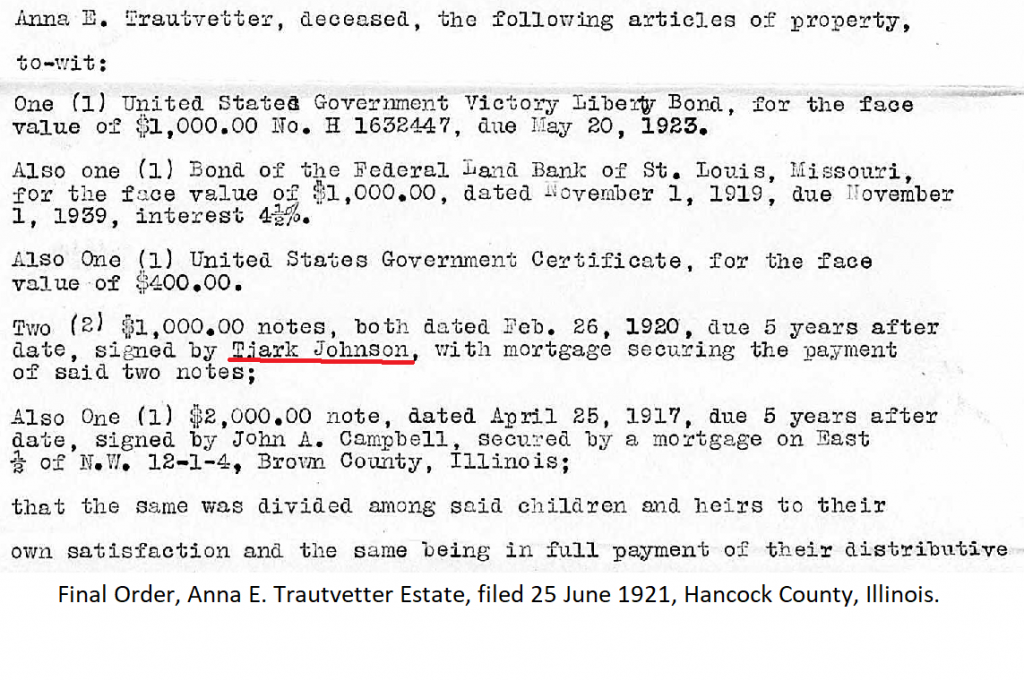 Now I knew who “Clark” Johnson was. It was actually Tjark Johnson.

Tjark was actually Tjark Janssen (1865-1945) whose brother was my great-great-grandfather Jans Jurgens Janssen (1856-1929). Both men were born in Wiesens, Ostfriesland, Germany, and were immigrants to Hancock County, Illinois, where they died.

I’m not really certain the Trautvetters and the Janssens had any other connection besides the loan. They were not near neighbors. They were not from the same area of Germany. They did not attend the same church. They did not live in the same town. It was not just Janssen to whom Anna had loaned money. There was another loan to a John A. Campbell that was secured by property in Brown County, Illinois. That’s a greater distance from Warsaw than where Janssen was living.

I’m wondering how the Trautvetters became acquainted with the two men they loaned money. It looks like it was more an investment on her part instead of putting money in the bank.

This was also a reminder to me to not jump to conclusions in trying to read something. I almost misread Johnson’s first name as Clark.