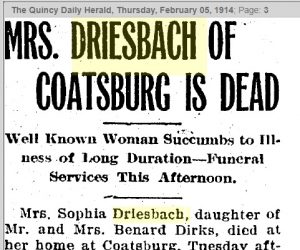 Sophia Dreisbach died in Coatsburg, Adams County, Illinois, on 2 February 1914. In her early forties, Sophia died in the town where she had been born in 1868 and where she had spent much of her life. She was laid to rest in the Dirks family plot in Coatsburg’s Gray Cemetery.

Sophia’s estate in Adams County, Illinois, lists a small amount of chattel property–just common household items. The bulk of her estate’s value was tied up in her interest in the estates of her father, Bernard, and childless sister, Anke, both of whom predeceased her. It is unlikely there would have been an estate settlement for Sophia had it not been for her interest in those two estates. Her husband John Dreisbach waived his right to administrate her estate and does not appear to have taken an active role in its settlement. Actually I almost did not bother to even look for a probate on Sophia given what I knew about the family’s finances and the fact that her husband survived her. There’s a lesson there.

The “Proof of Posting” was filed on 1 March 1915 in the Adams County Court. Notices were posted in Quincy, Illinois, and one was also sent to John S. Dreisbach, Sophia’s husband, who was living at 16 N. Harvey Street in Oklahoma City, Oklahoma.

Sophia’s obituary in the Quincy Daily Herald on 5 February mentions her husband only once stating that they were married in 1896 and that he survived. His residence at the time of her death is not stated. John is not mentioned elsewhere in the obituary and Sophia is styled as “daughter of Mr. and Mrs. Benard Dirks” in its lead sentence. The pastor of Coatsburg’s St. James Lutheran Church refers to Sophia as “childless and foresaken.”  The judgmental reference has caused me to wonder if John was actually living with Sophia at the time of her death. 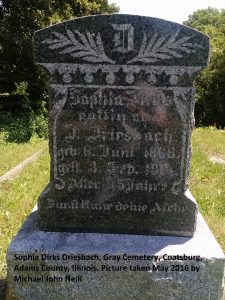 Sophia has a stone in the Gray Cemetery in Coatsburg in the Dirks family plot where her sister Anke, her parents, and other members of her family are buried. Her husband is mentioned on her tombstone, but no dates of birth and death are given. It is assumed that he is not buried in the cemetery with her.

The Adams County, Illinois, Register of Marriages (1892-1896, license number 10204–there are no page numbers) contains the entry for Sophia and John’s marriage. In summary:

John Dreisbach was a farmer with an address of Carthage, Illinois. The twenty-six year old was a native of Leroy, Kansas, and was the son of Alfred Dreisbach and Nancy Key. It was his second marriage. Sophia Dirks was a twenty-eight year old living in Coatsburg. Her father was Bernard Dirks and her mother’s maiden name was “Muller.” They were married on 29 April 1896 in Coatsburg by the pastor of the local Lutheran Church. Bertha Dirks served as the witness.

John had been married before–in Kansas in 1888.

He married in Montgomery County, Kansas, to Ulysses Grant Darbro on 1 November 1888 in Sycamore, Montgomery County. He indicated then his age was twenty-two, but his parents’ names are listed as A. N. Dreisbach and Nancy Key.

Ulysses Grant was a female. It is not known whether she died  before 1896 or whether she and John divorced. At this point, the next record available for John is his 1896 marriage record in Adams County, Illinois.

On 23 December 1914 John S. Dreisbach found himself in front of a judge in Oklahoma City. We will see why in a future post.