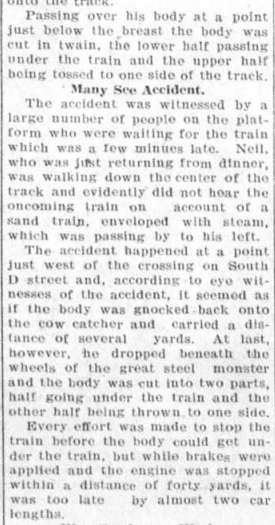 Passing over his body at a point just below the breast the body was cut in twain, the lower half passing under the train and the upper half being tossed to one side of the track.

The accident was witnessed by a large number of people on the platform who were waiting for the train which was a few minutes late. Neil, who just returned from dinner, was walking down the center of the track and evidently did not hear the oncoming train on account of a sand train, enveloped with steam which was passing by to his left.

The accident happened at a point just west of the crossing on South D street and, according to the eye witnesses of the accident, it seemed as if the body was gnocked back onto the cow catcher and carried a distance of several yards. At last, however, he dropped beneath the wheels of the great steal monster half going under the train and the other half being thrown to one side.

Every effort was made to stop the train before the body could get under the train, but while brakes were applied and the engine was stopped within a distance of forty yards, it was too late by almost two car lengths.

There’s more in the Republican-Atlas about Joseph’s death and funeral. We’ll continue the transcription in a future post.

Meanwhile if I want to get a better fix on just where this happened, I’ll need to use contemporary maps. It’s possible (although I really doubt it) that the tracks have been moved (even if slightly) between 1906 and today. It’s also possible that the street names have changed as well (although in this case they have not). While using maps as close to the time of the event as possible is preferred they need to be used in conjunction with modern maps to see where the event actually happened.

While it has nothing to do with Joseph’s accident, it’s important to double check titles and names when researching and writing. I caught myself referring to the newspaper that printed  the 1906 article as the Monmouth Review-Atlas–that’s the name of the present-day paper in Monmouth, Illinois (which isn’t all that far from where I live). I’ve also referred to the accident victim as John instead of Joseph. The newspaper’s original headline made that same mistake and now I’ve gotten it in my head. Always check.