If you went to the Norwood, Illinois, post office in April of 1886, you would have seen a notice that the estate of Andrew Trask was being settled up. If Andrew owed you money your time to submit a claim for payment was running out.  If any of your neighbors were owed money by Trask, they would hopefully see the notice as well.

The notice was published in the Aledo Democrat and posted in other places where interested individuals were likely to see it. State statute dictated that the notices be published in a local newspaper and public places.

George Trask deposed in open court at the April 1886 term of the Mercer County Court that he had placed probate notices for the Andrew Trask estate in five places in Mercer County. Notices were not to be placed in out-of-the-way places. They were to be located where those who had an interest in the estate would reasonably see them.

Notifications were placed in the following locations:

Andrew Trask was a land-owning farmer, so establishing where he lived in the county was not difficult–the legal description of his farm provided that information. However, had he been a tenant farmer property records would not have documented his likely residence. In that case the location of the probate notices would have been helpful in determining approximately where he lived within Mercer County.

The posting of the notices on the door of the court house and the County Clerk’s office don’t really help in determining where Trask lived within the county. The posting of notices in the county seat was frequently done without regard for where the deceased lived. The other locations are likely near where Trask lived and, as a result, more likely to reach those individuals with whom he interacted and may have done business. Those associates–whom he may have owed money at his death–would be more likely to see the notices in those areas. 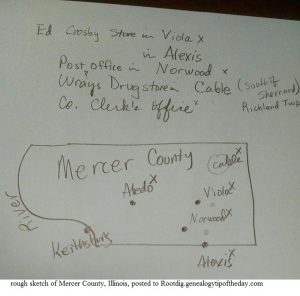 A rough map of the county was created  and the locations approximately placed. Alexis is on the southern Mercer County line (somewhat east of center). The other locations (Cable, Viola, and Norwood) are all in eastern part of the county. Based upon their location, it seems reasonable that Trask lived in the eastern third of the county. It would be unlikely that he lived in Keithsburg–located in the southwestern portion of the county along the Mississippi River.

It’s not ironclad proof of his residence and it does not provide evidence of where Andrew died. It is suggestive of where he lived towards the end of his life.

Locations of probate notice can be suggestive of where someone lived within the county where the probate was administered. In certain research situations that suggestive location can be helpful. It may allow you to distinguish between two individuals with the same name or to narrow down locations when looking for additional records.