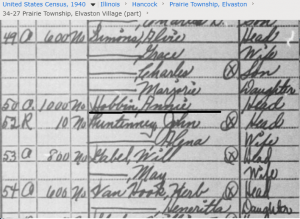 When Kethyleen Seigle came to the house on Maple Street in Elvaston, Illinois, she found eighty-year old Anna Habben living alone. Anna’s husband John died the year before and Anna would only live there for a short time before she herself died in 1941.

Like any census enumeration, Anna’s needs to be evaluated in the context of other entries on the census page. There are two immediate aspects of the entry that are unusual:

The circled “x” is to indicate the individual in the household that provided the information to the census taker. My first thought was that the notation was not made because since there was only one household member that they were automatically the provider of the information. That’s not necessarily correct. The next thought was that the enumerator simply did not indicate the provider of information for any single member household. That was not correct either as other households in the same enumeration district with the same enumerator had the circled “x.” Did the census taker forget or did someone else provide the information? 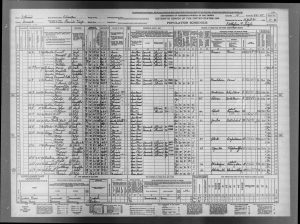 At this point, I need to review the 1940 census enumerator instructions. I also need to keep in mind that the census enumerator can make a mistake. I had wondered briefly if the missing household somehow was tied to Anna’s two granddaughters whose parents died before the 1940 census enumeration. It was not as a review of my notes indicated those granddaughters were married and living with their husbands in 1940 and enumerated separately. All four of Anna’s sons (Mimka, Henry, George, and Louis) are enumerated in their own homes in the portion of Prairie Township outside the village of Elvaston.

The 1940 census enumeration for Elvaston does not give street names or house numbers. This makes it more difficult to see what home was missed (if any). Anna’s home is known to have been on Maple street.

Other than being enumerated as “Annie” there’s nothing about her enumeration that is different from any others in which she is listed beginning with the 1870 enumeration where she appears with her parents in Prairie Township. It is possible that a neighbor or someone else provided her information since there is no circled “x” by her name and she’s the only one in the household. Being listed as “Annie” is not that unusual, but given that it’s different it could suggest that someone else provided her information.

Then there is her age.

Ages ending in a “0” sometimes make researchers wonder if the age has been estimated by someone. This is more likely to be the case when the individual in question is older. If the age is unknown or the enumeree unwilling to respond, an age is sometimes estimated and those estimates frequently end in “0.” That’s not the case with Anna. Her age has not been estimated. She was born in March of 1860 and by the date of the 1940 census, she would have been exactly eighty. The fact that her age ends in a “0” in this case only indicated that her age was either corrected or guessed correctly.

I’ve made a note in my transcription of this census that the household numbers are off and that no one in the household is indicated as having provided the information for the census. Since nothing else about this entry is unusual, I’m not going to follow up any further.

I will keep my eyes out though for any other households where no one is indicated as having provided information–just because I’m slightly curious about that.