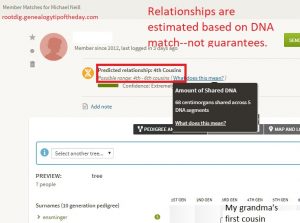 My matches at  AncestryDNA continue to go up as the result of their DNA sales in late 2017.

That’s good as it helps me to sift out the matches I already had.

That’s not taking into account individuals who were half-siblings, double relationships, etc.

This match shared 68 centimorgans of DNA across 5 segments. I can’t see on the AncestryDNA results screen how big each of those segments actually is and those shared centimograns is what is being used to predict our relationship.

The submitter had a small tree going back to their grandparents. Fortunately I recognized one of those surnames as the married name of my great-grandfather George Trautvetter (1869-1934)”s sister–Helena (Trautvetter) Ensminger. It did not take long to connect Helena to the submitter’s tree. The submitter was a great-grandchild of Helena–making us third cousins.

Determining who this new match is will help me to sort my other matches. While there are limits to how much it will help, it will help me quite a bit. There are now four descendants of my gg-grandparents,  John Michael and Franciska (Bieger) Trautvetter who have have been identified in my  AncestryDNA results:

This new match helps me quite a bit in sorting my matches–because this match does not also descend through son George and his wife. George’s wife, my great-grandmother, has significant New England ancestry, probably forty first cousins (many of whom I cannot trace), and an unknown grandmother. This means that many of the matches of matcth1,  match2, and I are people I cannot figure out quite yet–but who are probably related through George’s wife because me.

And then there’s people match1, match2, and I share that are actually related through George’s mother, Franciska.

Which for me is really great as tracking some of the family of Franciska was one of my DNA testing goals.

Fortunately, three descendants of John Michael’s first cousins have been identified in my AncestryDNA results already.

This method is not full proof. I could have DNA matches to descendants to Franciska that are not shared matches with match3. But it is a start.