The Gibson genealogy indicated that John Gibson who was born in Stow, Massachusetts in 1751 died after 10 April 1811.

The problem was that it made no mention in the section on John Gibson of why the author thought that John Gibson was alive on that date.

While the author appears to have utilized local court, probate, and land records in the compilation, there are no specific citations to individual statements. My suspiscion was that there was some document that referenced John Gibson on that date.

The discussion of John Gibson (in Mehitable Calef Coppenhagen’s John Gibson of Cambridge, Massachusetts and his descendants, 1634-1899, published in 1900) indicated that the compiler lost track of him in 1799.

Then I got to thinking.

What document could a researcher find without knowing where John Gibson lived that would indicate he was alive?

The answer was obvious: the estate settlement of his father. 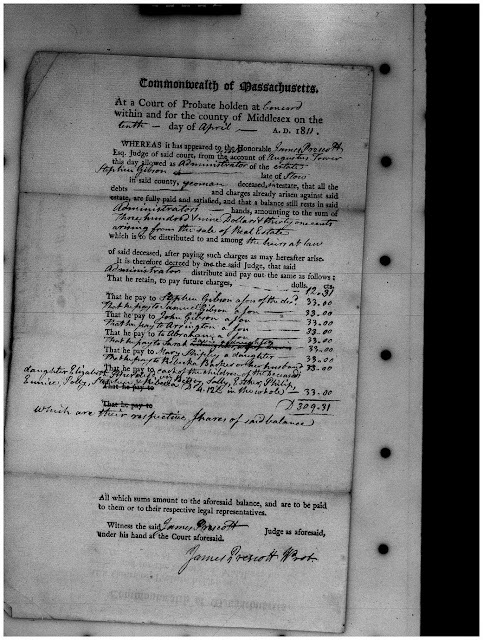 And sure enough in the estate settlement of Stephen Gibson of Middlesex County,Massachusetts (father of John Gibson and located in estate packet 9115) there was a final disbursement record to the heirs dated 10 April 1811.
John Gibson is listed–there is just no indication of where he lived mentioned. This is the only document in the estate papers of Stephen Gibson that mentions all his children by name, including the married names of his daughters and the children of one daughter who died before the final disbursement was made.
It’s important to note that the daughter may have survived her father. The only thing that this document specifically indicated is that she died before the final disbursement was made.