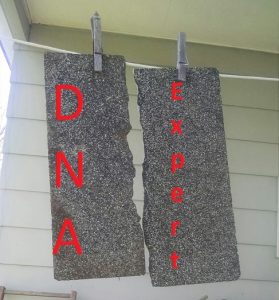 There’s been much gnashing of genealogical teeth over the use of GedMatch to develop a list of potential suspects in a series of rapes and murders committed in California years ago. We will leave the gnashing of teeth to the dental experts.

GedMatch is a publicly accessible database. It’s in the fine print of the user agreement. Anyone can submit a DNA sample that matches the parameters set by GedMatch.

There are concerns over search warrants and the use of this data. I’m not a lawyer, but the data is public and has been freely submitted by users.  I’m not certain it is any different from searching twenty-year old newspapers for an article or photograph that, years after the fact, suddenly has bearing on an investigation.

As it becomes seemingly easier to solve a cold case by “DNA magic,” my concern is is that smaller police departments, with smaller budgets and fewer employees, who are investigating less noteworthy crimes, “hire” a “DNA specialist” who has limited experience in analyzing genealogical DNA results and perhaps has only “played around” with their own results to be reasonably knowledgeable.

Reasonably knowledgeable does not cut it. Not by a long shot. We don’t want individuals with limited experience hanging out shingles and calling themselves DNA experts because two months ago they spit in a tube and have spent a few hours surfing through their DNA results.

Developing lists of potential criminal suspects carries a different weight than trying to figure out your third cousin. Yes..yes…I know all about the genealogical proof standard, but lets admit how many users of genealogical DNA have never heard of it.

They don’t need to be shingle hangers.

Before a shingle hanger does more than hang shingles.