Relationship projections in DNA test results are estimations based upon shared DNA.

The relationship is an estimate.

But that does not mean that you got exactly one-eighth of your DNA from each of your great-grandparents.

When your father’s body is creating the genetic material that will be passed on to you (the autosomal DNA anyway), there is no one standing there saying: “let’s make certain that we pass exactly half of grandpa’s DNA to this child and exactly half of Grandma’s DNA to this child.” There is similarly no one overseeing the mother’s passing of autosomal DNA either. The body does not look at the autosomal DNA and make certain it is passed to the next child based on ancestral proportions.

Those bills you get (half of what your father had) may not be exactly twenty-five of his father’s bills and twenty-five of his mother’s bills. It could be twenty-seven from one and twenty-three from another. But you still got fifty. And…without going into detail the amount you got from each is probably close to have. Probably close and not exactly. The problem is that probably close and not exactly gets magnified as the generations go further back.

Because the autosomal DNA from your grandparents and earlier generations of your family is not equally split in your genetic makeup, predicting biological relationships beyond a certain point is an estimation. That’s why the Shared cM Project was started.

And that’s why my third cousin (we’re both great-great-grandsons of the same couple), shares a smaller amount of DNA than expected. AncestryDNA predicts that our relationship is between 5th and 8th cousins. According the current version of the Shared cM Project, third cousins can expect, on average to share 74 centiMorgans of DNA. Expect. On average.

99% of third cousins share between 0 and 217 centiMorgans of DNA according to the Shared cM Project. 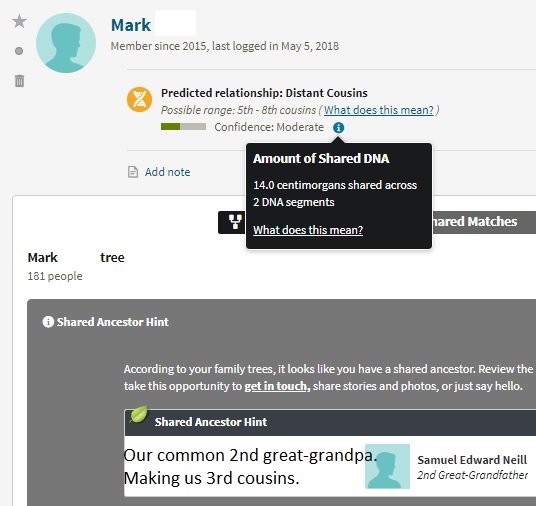 Your autosomal DNA test results should be used as one more genealogical tool. They are not the only tool and they should not be used in isolation.

Join me for my AncestryDNA class.