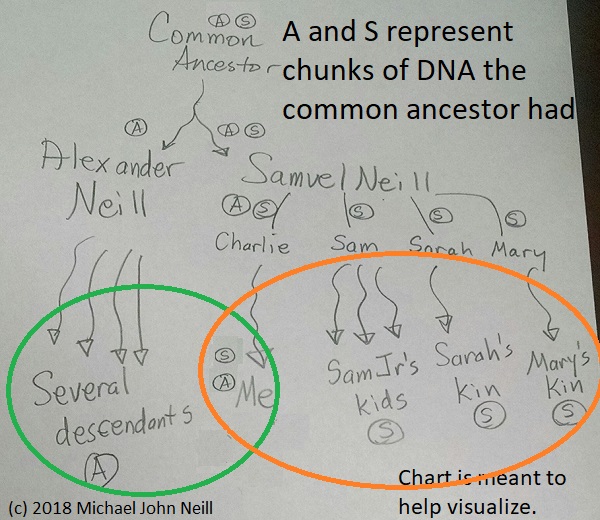 Part of my problem in utilizing my AncestryDNA matches to find relatives of my Irish forebears was that I was too concentrated on matching other descendants of my Samuel Neill. It’s tempting to do that–after all, there were about ten other descendants of Samuel in the AncestryDNA database. They would have to match other Neill relatives who connect back to an earlier generation before Samuel.

The illustration to this post simplifies what very easily could have happened. The common ancestor (whose last name may very well have not been Neill and who was an apparent ancestor of Alexander and Samuel) had two chunks of autosomal DNA that are relevant to our discussion. For simplicity’s sake, we’ll call them chunks A and S.

Chunk A and S got passed down to Samuel.

Chunk A got passed down to Alexander. It’s possible Alexander got chunk S as well, but for this scenario chunk A is what matters.

Chunks A and S made their way down to me from Samuel, via Samuel’s son Charlie and the intervening generations. Chunk S made its way to some of Samuel’s descendants through his children Sam Jr., Mary, and Sarah.

Chunk A made its way from Alexander down to some of his descendants.

Looking at shared matches with other descendants of Samuel was not a bad idea. But it should not be the only idea used to find other relatives who connect through earlier generations.