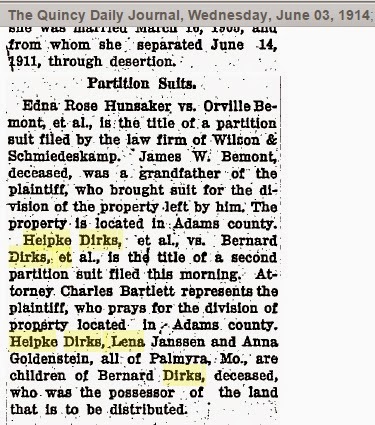 Does this qualify as evidence that Anna Goldenstein was living in Palmyra, Missouri, in 1914?

After all, it did appear in the newspaper and was (supposedly) taken from court records.

Does that alone make it evidence that Anna Goldenstein was actually living in Palmyra in 1914? Should I add that as a residence for her in my genealogical database.

I don’t think so–particularly without analyzing it in more detail.

It’s information that states Anna lived in Palmyra in 1914. But I’m not quite ready to put it in the category of evidence.

There are a few reasons:

It contradicts everything else I know about Anna. Contradiction in and of itself does not make one piece of information wrong. It does make it suspect and require that the information be analyzed further. Anna Goldenstein is known to have lived in the following locations during the approximate time periods:

Never in Palmyra or even in Missouri–to the best of my knowledge. That “to the best of my knowledge” is key because there could be something about Anna in 1914 that I don’t know. It is possible that she lived there temporarily.
This is a derivative source. The information about Anna’s residence as shown in this image is derivative because the newspaper is getting the information for this article from court filings. Those filings are the original source as they are the original record. Anna’s residence was likely obtained from their court petition. It is very possible that the newspaper made a mistake.
I’ve not seen the original. The actual court records will make it clear what they actually said. If those records indicate Anna Goldenstein lived in Palmyra, then I will be more inclined to add it to my genealogical database.
Not every piece of information is evidence. We have to analyze that information and decide if its perceived reliability warrants us putting it in the evidence category.
Learn more about evidence in Evidence Explained: Citing History Sources from Artifacts to Cyberspace.

——————————–
What do I think happened?
My intuition is that the newspaper got mixed up. None of three women the newspaper references as living in Palmyra are known to have lived there–they were Adams County residents. Another heir (not mentioned in this newspaper clipping) lived in Palmyra is the the likely reason for the error.