This map, purported to have been created by Pierre Raffex in 1688 appears in a 1932 atlas by Charles O. Paullin. The map is centered on what are now called the Great Lakes.

What surprised me on this map was “Lac des Illinois.” Lake Illinois? From where I could see it looked like Lake Michigan. 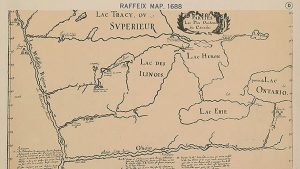 I was curious about the reference to the lake as “Lake Illinois” instead of Lake Michigan. At this point, I don’t know if the description of the lake with this term is an aberration or if there was a time when the lake was know as Lake Illinois. It is also possible that the reference is a simple mistake. I don’t know at this point–and that’s not really the purpose of this post.
The reference got me to thinking about what genealogists should do when they see something they think is wrong:
And, consider that place names can change.
All of these things are things to think about even if the reference on the map was an aberration.
And–it goes to show you that you can always learn something from looking at old maps.