[note: this post originally ran in 2015–since I’ve made some DNA discoveries on my Neill line, I decided to revisit what I know about this family.]

It’s been some time since I worked on Rosanne Neil Scott. I already had a transcription of her marriage return from the 1850 Quarterly Returns of Marriages in Ireland, but decided to obtain a digital image of the actual record.In this case, there was really nothing on the actual record that I did not know. The couple were married on 1 August 1850 at the Newtown Limavady Church in Drumachose parish in County Londonderry, Ireland. Of course, one never knows how a transcription and an original record compare until one has the original record. 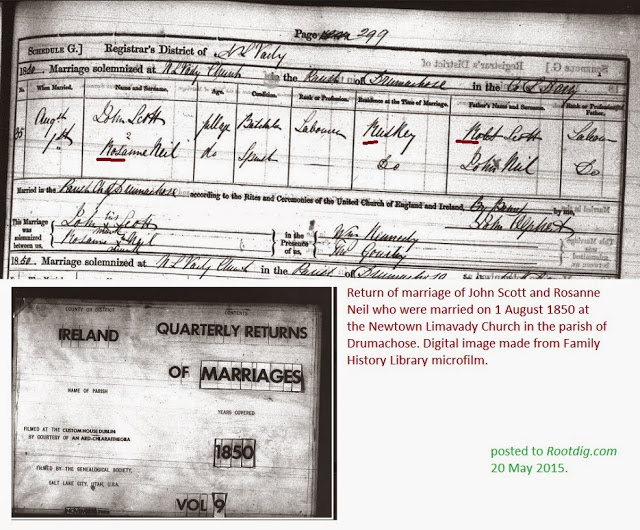 Unfortunately both the bride and groom were only listed as “of full age.” Rosanne’s father is listed on John Neil, a laborer.

Neil and Scott were both living in Muskey at the time of their marriage. I was a little confused on how to interpret their residence, but comparing it to the “R” in Rosanne and Robert made it clear that the intent was Muskey. It also didn’t hurt to look at an online list of place names for the Drumachose parish. If Neil and Scott were married in Drumachose parish at least one of them would have been living in the parish.

When I began reviewing my notes on Rosanne, I was uncertain of why I thought she connected to my Samuel Neill and his brother Joseph. My reasoning behind her connection to the Neill brothers was no where in my notes. Her marriage return is the reason I think she connects to them. Joseph’s 1862 marriage indicated that he was also a son of John Neill. Joseph was living in Tagues Hill in the Drumachose parish when he married in 1862. The question is: Was there more than one John Neill living in that section of the Drumachose parish?