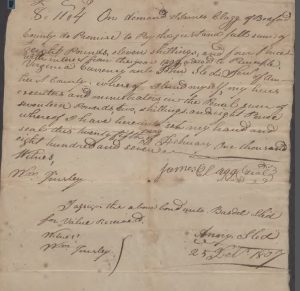 On 25 February 1807 James Clagg made out a “bond” indicating that he owed John Sledd 8 pounds, 11 shillings, and 4 pence. The debt had been accruing interest since 1799. At the time Clagg lived in Bedford County, Virginia, and Sledd was a resident of Amherst County. William Tinsley witnessed the signature of Clagg.

Tinsley also witnessed the signature of Amy Sledd of the same date where she assigned the bond to Basdel Sledd “for value received.”

The drama over this debt was just getting started in 1807.