The problem with court records is that while they provide significant detail into our relatives’ lives, they often leave out details.

We’ve seen that Fannie Neill “couldn’t be found” when the Hancock County Sheriff came knocking in 1908 to give notice that the farm she was renting from her father’s estate was subject to a partition suit filed by her mother and brother William.

The partition suit apparently wasn’t the only legal action William took against Fannie.

The final account in the partition suit references a judgment against Fannie Neill by her brother William for $180.68 that was obtained before Squire Martin. The reference to the judgement does mention what the judgment resulted from, but it could very well have had to do with the farm that the Neills were renting–perhaps for grain, supplies, or other expenses. 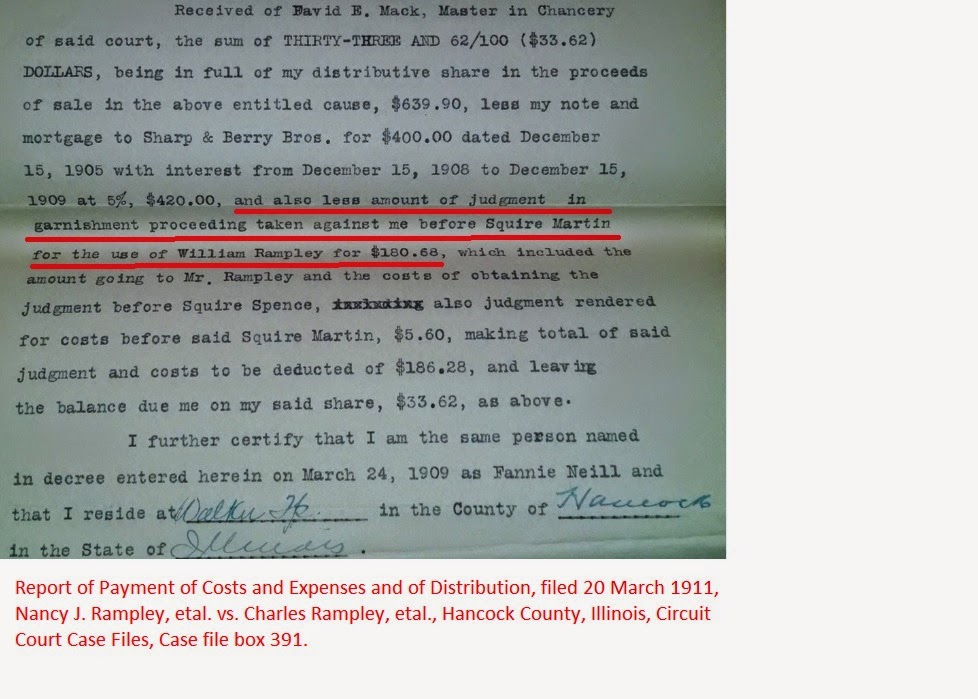 Apparently when he issued the judgment, Squire Martin attached it to the Neill’s interest in the farm of Riley Rampley and the amount was taken from Fannie Neill’s amount when the partition suit among the heirs of Riley Rampley was settled.

In this era, cases for small amounts of money could be heard in front of a justice of the peace instead of the county court. That seems to be what happened here.  Where those records are is another matter entirely. How necessary they are to my research is also another matter. I’m not certain it’s worth my time to search them out.

There may have been a little more going on here than simply the partition suit. Without seeing the records, it’s difficult to speculate about William Rampley’s claim against the Neills. It’s also possible that they simply decided to let the amount come out of their inheritance–which apparently it did.