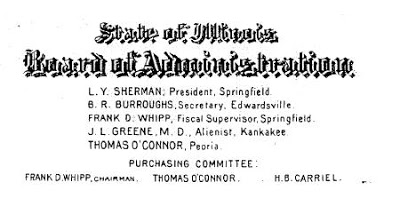 I was reviewing some letters from an insanity file from the early 20th century. I had seen them before, but apparently had not read every word on every page. When reading the letterhead on a letter contained in the file, I came across a title I had never heard of before: Alienist.
Simply put, it’s an obsolete term for a doctor who dealt with mental disorders. This is fitting for a doctor who was on the board of administration for the Illinois State Hospitals, which concentrated on patients who had been adjudged to be insane.
The term really had nothing direct to do with my research, but was an interesting short diversion.