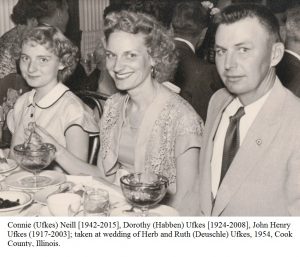 They were kidding, but it made a good topic for a blog post.

My post about Ancestry‘s “We’re Related” app indicating I had a “different grandmother” was shared with my Facebook friends. One response teased me with “are you really sure who your grandmother was?” I knew my Facebook friend was kidding me–let me be very clear about that. But I got to thinking about their response.

Anyone who has seen me, my mother, and my maternal grandmother cannot deny there is a resemblance among our facial features–particularly when photographs of us under the age of thirty are compared. Of course, “looking alike” is not always good proof of a relationship, but it is suggestive–especially when people are believed to be related in the first place.

Will there be surprises in my DNA results at some point? Maybe…only time will tell.

And now I realize also that I need to go through my photographs and identify them better than I have. The ones taken before 1950 I’ve pretty much gone through and identified. It’s the later ones that I really need to work on.