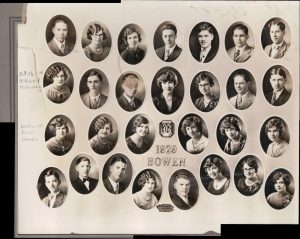 Note: this post is originally from 2015, but we’ve moved it here and combined two posts into one.

There are times when one has no reason to doubt the accuracy of some information one has received. But the problem is accurately tracking the actual source of the information.

The problem was that there were only two individuals identified on the picture, my great-aunt Nellie (Neill) Shanks and her friend Edith (Stillwell) McGinley. No other names were listed and I certainly didn’t know who any of the other individuals were. My great-aunt attended and graduated from Bowen High School because it was the closest “last year” high school. There were no other close family members of mine who graduated from Bowen High School.

Last week the wife of a first cousin one removed of my father on the other side of the family wrote about the photograph having seen it on my website. She also had a copy of the picture. Her copy had the names identified on the back of it and she graciously sent me a list of the names. Fortunately the two people identified on my picture were identified as the same on hers.

I find myself thinking about how to craft a citation for this photograph and the individuals it pictures. The “information” actually came from two separate sources. The image came from a digital scan of my great-aunt’s copy of the photograph held privately by my father’s first cousin. That photograph only identifies two of the individuals.

The identification of the remaining individuals came from another copy of the photograph held by the wife of my father’s first cousin once removed.

My citation needs to take this into account–the image needs to be sourced separately from the identification.

Once I’ve crafted it to my satisfaction, we’ll have a follow-up post.

Do you have “sources” that are really multiple sources?

I decided on a citation, but I’m not certain I’m overly happy with it.