An earlier post (“Aunt Caty Warned Out of Addison in 1814“) mentioned a “warning out” a relative received in Addison, Vermont, in 1814.
Like many records, there’s a little more here than just what is on the surface. The “warning out” didn’t mean that Aunt Caty was drug out of town in January of 1814 with her children in tow and her belongings dragging behind her in a cart. It was most likely a warning that she was a newcomer to Addison and was potentially a person who would not be able to support herself. Warnings out have a long history dating back to the early days of the American colonies and stemmed from English practice. The essence of the intent behind the system was that the village not have new residents move in who had no means of support.
Caty’s brother-in-law, Samuel Sargent, was “warned out” of Addison in 1812–also in February. It may be that Samuel actually never left and his residence there was the reason Caty moved there herself after her husband died. Maybe. There’s nothing in these records to indicate that however and I’ll need to do more work to determine if Samuel Sargent was still living in Addison at the time when Caty was “warned out.” 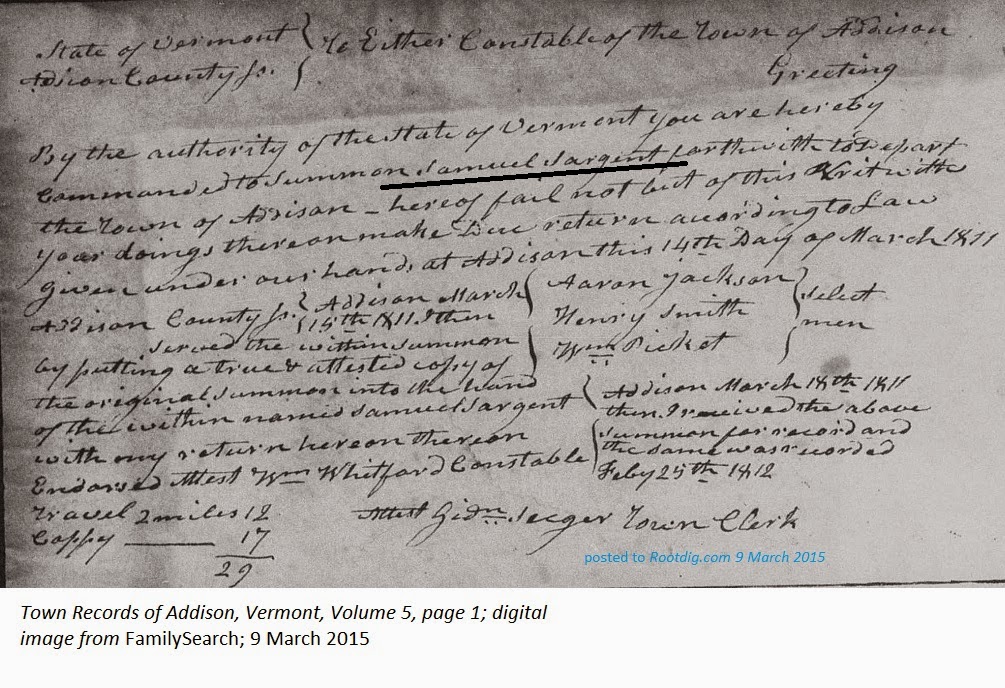 These records, like all records, require an understanding of their intent and their implementation. But don’t just assume that your ancestor was “dumped at the village line” as a result of the warning out.

An additional reminder that sometimes just “Googling” to find information on a topic may not be sufficient. My own Google searches for this topic located several online references that provided a very superficial treatment of these records. Understanding the purpose and background of any record is crucial to the interpretation of it. Readers with an interest in the topic may wish to refer to Josiah Henry Benton’s Warning Out in New England (Boston, 1911, W. B. Clarke Company).

We’re working on a longer post with some references and additional readings on these records. Stay tuned.