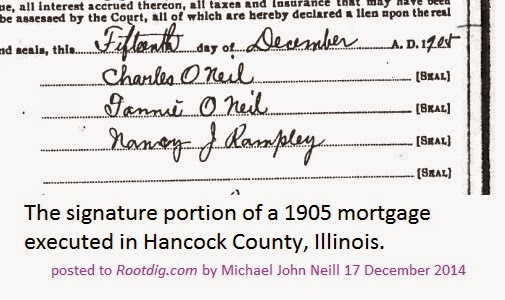 This is the signature portion of a mortgage executed by three of my ancestors on 15 December 1905 in Hancock County, Illinois.

Speaking from personal experience, I know the last name of Neill gets spelled a variety of ways and I understand spelling variations and errors. In the initial portion of the mortgage, where the mortgagors are named, these three are styled as “Charles O’Neil, Fannie O’Neil, and Nancy J. Rampley.” I can easily understand how the name may have gotten spelled “O’Neil” in that initial part of the mortgage.

I’ve seen numerous documents signed by Charles and Fannie Neill–never once did they sign their name “O’Neil.” Not on their marriage record, not when Charles testified in a pension case, not when Fannie signed court documents in 1907, etc. They wouldn’t have signed their name with an “O.”

Unless maybe they were told to because that’s the way it had originally been put in the initial portion of the document.

Just something to think about.

And that’s what we are supposed to do when we analyze the records we find-think about them. It’s what makes our research better, causes us to notice things that others overlook, and helps us migrate from merely collecting data to allowing the data and records we find to tell us as much of the story of our ancestors as possible.

All from three signatures on a mortgage.