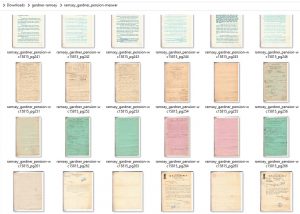 There were 283 digital images that I received from the Mexican War Pension file of Gardner Ramsey. I’m never going to transcribe the entire set of documents. However, taking notes is an excellent idea. As I take those notes, I don’t need to complete a complete citation for every document. The images are numbered sequentially, so I have decided to include that in the partial citation I’ve created for each item as I take notes from it.

The records concentrated on the end-of-life expenses for Gardner and his financial state during the last few years of his life.

Making extractions or abstracts of the images seems the most prudent approach to utilizing this set of records.

It’s worth noting that apparently Mary Ann was incorrect in her belief that there was no record of her marriage. There may be other occasional discrepancies in the file. That’s to be expected and why it is important to indicate which document made which statement. That will help in my analysis and in determining which statements to which I will give the most credence.

There’s more–including pages of testimony about the Ramseys financial status during the final years of their lives and information about their movement through Illinois and the southwestern part of the United States.