Sometimes a wiggle is just a wiggle.

Entry 101 in the image accompanying this post was discussed in an earlier blog post, (“When Is It a Diacritic and When Is It Shorthand?”).

It turns out that the symbol above the first “a” in “Catharina” is not a diacritic at all. That was how I referred to it in the initial posting–which was incorrect. Instead it is part of the uppercase letter “C.” 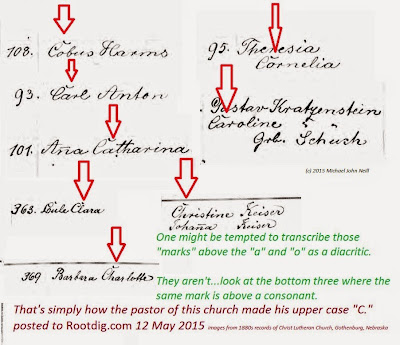 A reader suggested this to me and, while I was not 100% certain, it certainly made more sense than it being a diacritic. My original blog post focused on the solid line above the “a” in “Ana” and the mention of the script over the “a” in “Catharina” was more parenthetical. In hindsight, I should not have been so quick to assume what it was.

Entries viewed in isolation are just begging to be misinterpreted. Handwriting should be viewed in the context of other records in the same series–hopefully in handwriting made by the same person.

To follow up on premise that the wiggle above the “a” was not a diacritic, I looked at other renderings of an uppercase C by the same minister. The top five entries are from the same page in the baptismal register as the entry of initial interest. They all have the same marking over the vowel following the initial C.

Three entries on the following page convinced me that the marking was not a diacritic–it’s also over the “L” in Clara, and the “h” in Christine and Charlotte. The same diacritic would not be over teh consonants as well. Looking at samples of uppercase “C” as shown in the image from Ernest Thode’s German-English Genealogical Dictionary

, made it a little more clear that there could be a “hook” on the upper right hand portion of an uppercase “C.”

Pastor’s “C”‘s don’t look exactly like those in the illustration from Thode’s book, but then again few pastors write the way they were taught in school. Record clerks are not much better. Interpreting handwriting is more an art than a science.

And it takes practice.

And sometimes one has to admit that there can be some wiggle room in an interpretation.

Thanks to reader Nancy P. for gently pointing this out to me and getting me in the right direction. And thanks to Ernest Thode for graciously allowing me to use this image from his German-English Genealogical Dictionary

. I’ve got a copy of Thode’s book myself.