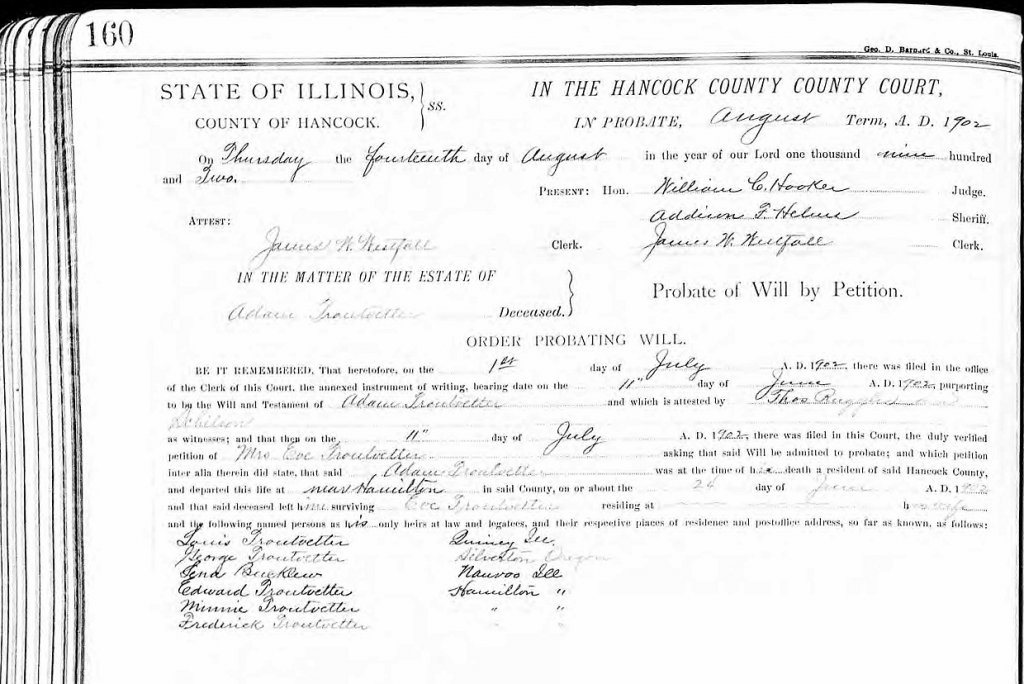 The 1902 order probating Adam Trautvetter’s will in Hancock County, Illinois, referenced the following heirs-at-law and legatees:

The names looked a little off based upon my memory (there should have been more heirs-at-law) and the name of Lena Bucklew was completely unfamiliar to me. It’s noted that legatees could easily be individuals with no family relationship to Adam and Lena could easily fall into that category. Of course memories from someone in 2019 (me) are second hand when the individuals being “remembered” were adults in 1902. Other contemporary records are needed. Fortunately the 1902 order was not the only record related to Adam’s estate that referenced his heirs. Adam’s will was written on 11 June 1902 and proven in court on 14 August 1902. It named his wife, Eve, and one daughter, Wilhelmina. No other individuals were named specifically. His other children were not named individually but were named in a clause where all his children were to share the balance of his estate after certain items had been paid.

When the estate was finally settled up in 1912, there were seven heirs listed in the final disbursement. The cash disbursements were not exactly equal due to chattel property disbursements that took place before the final cash settlement. Those individuals listed were:

The working theory is that the initial list of heirs-at-law and legatees has merged Lena Salzer and Louise Buckert to create Lena Bucklew.

A complete reading of the probate file for Adam should be done to determine if there are other references to Lena Bucklew. Individual marriage records for all of Adam’s children should be referenced as well–it’s possible that a daughter was married to a Bucklew at some point in time.