In all honesty, I thought this letter to the editor of the Prairie Farmer in 1944 would be about grain prices.

Was I ever in for a surprise when I received a digital image of the letter my great-grandfather Ufkes wrote in 1944. 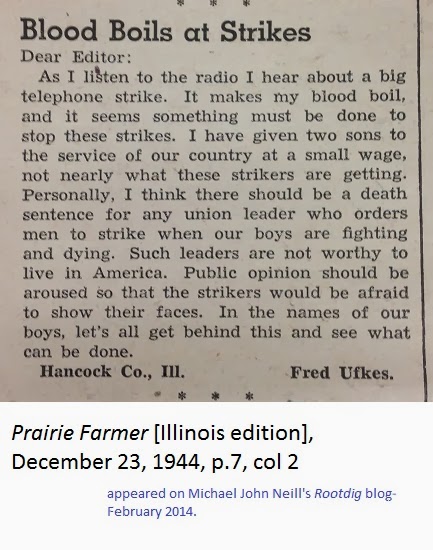 I knew my great-grandfather had two sons who served in World War II. I was not aware of the 1944 telephone strike and his feelings about it.

Sometimes researchers are tempted to ignore those “non-genealogy items” that may appear in trade publications at times when someone is not being born, getting married, or dying.

That is a mistake.

There were no new genealogical facts in the letter Great-granddad wrote. But there was plenty of opinion. There are no letters or other family mementos passed down in the family. And it is easy to see the frustration he felt when one considers that at the time he wrote this letter two of his five children were serving in the American forces in Europe.

It appears that the strike was ended in November of 1944, per the clipping from the Freeport Journal-Standard that appears in this post. The telephone strike apparently did not reach rural Illinois, but at the time Ufkes probably wrote this letter the strike may have still been going on or not yet resolved. It is also difficult to know in my elementary searches just what other media were saying about the potential for extended strikes as Ufkes references “radio” in his letter.

I’m anxiously waiting for the rural newspapers in the area where Ufkes and other family members lived to be digitized to see if there are other letters or commentary written by family members.

cribe their ancestor as a Republican or a Democrat without really any specifics of what that means for them personally.

It’s been a long time since a genealogical discovery gave me a history lesson and I never dreamed that it would be from one of my rural farming ancestors.

It just goes to show you never know what you may find.

And the point must be made that it is important to never judge an ancestor by what you find. Ufkes was in the position of having two sons in the war. That’s a position that I’m certain most of us would not want to find ourselves.