Despite what they may want you to believe, not every dead person is in an Ancestry.com tree.

There may be a John Cheney buried somewhere in the trees at Ancestry.com, but if he’s there, he has no place of birth or place of death and I was not going to spend hours looking for an entry for him in one of the trees.

Various branches of the Chaney family (particularly the descendants of Thomas Chaney  who died in 1856 in Bedford County, Pennsylvania) are notoriously untraced. John is one of those branches.

I quit looking to the trees for answers and went to GoogleBooks instead. My search was simple “thomas cheney colusa” (his name and county of residence). There were several hits, but the most relevant was a biography of him from a 1906 history. I had traced John to California via census records but had been unable to locate him in anything other than a FindAGrave entry.

Reading the biography confirmed I had the right guy–John was the son of Abraham and Janet (Evans) Chaney who was born in Bedford County, Pennsylvania, and spent time in Coshocton County, Ohio. John’s biography lays out a series of travels throughout several states before he lands in Colusa County, California, where he settles. 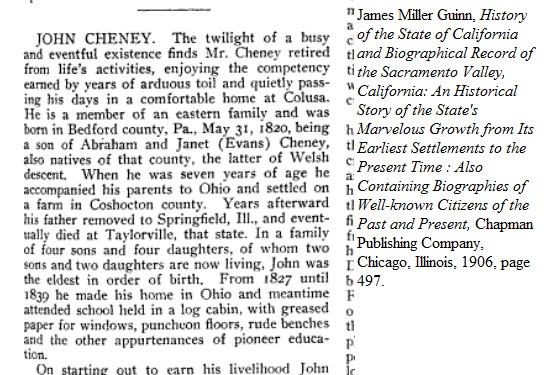 It’s important to remember that not everyone appears in an online compilation somewhere.

In this case, it was also important for me to realize that John used the “Cheney” spelling of the name instead of the “Chaney” variation that was used by his grandfather, Thomas Chaney (who died in Bedford County, Pennsylvania).

Note: the Abraham Cheney referenced in the biography is my uncle. His sister was Elizabeth (Chaney) Rampley (1804 Bedford County, Pennsylvania-1883 Hancock County, Illinois). Apparently when Abraham moved with his young family to Coshocton County, Ohio, he brought his unmarried sister with him. That’s where she met and later married James Rampley.