Genealogical records are not analyzed in isolation. The provenance of the document, condition of the document, probable informant, and perceived reliability are four key components to analyzing information any record contains.

Tombstones should be no different.

One key factor in analyzing information in a tombstone is the perception of how long after the death the stone was erected. There are no guarantees in regards to the accuracy of information contained on a grave marker. Stones erected while dirt on the grave is still fresh are not necessarily correct. Stones erected a century after the deceased has gone to their final reward can contain correct information.

It’s just that your transcription of a stone should indicate if it appears that the stone you have transcribed was not the original stone. There will still be unanswered questions. Was the information on the standing stone transcribed from an earlier stone that was difficult to read? Perhaps the date of birth was obtained from original records and the information on the stone was the result of painstaking research.

It’s hard to tell, but a transcription should indicate if there’s a suggestion the current market was no the original one. 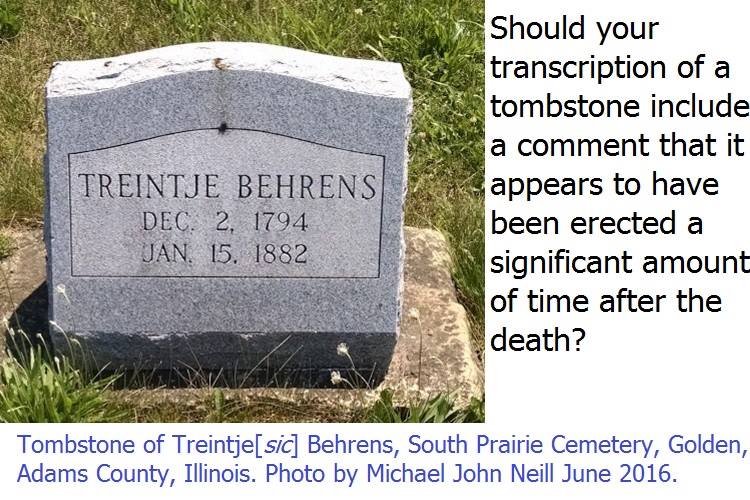 The stone of Treintje[sic] Behrens in the South Prairie Cemetery near Golden, Adams County, Illinois, appears to have been erected as a replacement stone. The type of stone and it’s general appearance do not match the other stones in the cemetery from the 1880 era. The inscription and the entire stone is simply too clean. The base on which it is mounted is larger than necessary, appears significantly older than the stone, and is similar in appearance to stones looking much older.

There’s nothing wrong with the stone being replaced. I’m glad someone did it.

But I need to make a notation in my transcription of the stone that it does appear to have been erected significantly after her death.

Is it the first stone put up years after someone died? No.

But should be note the time lag in our records? Yes.