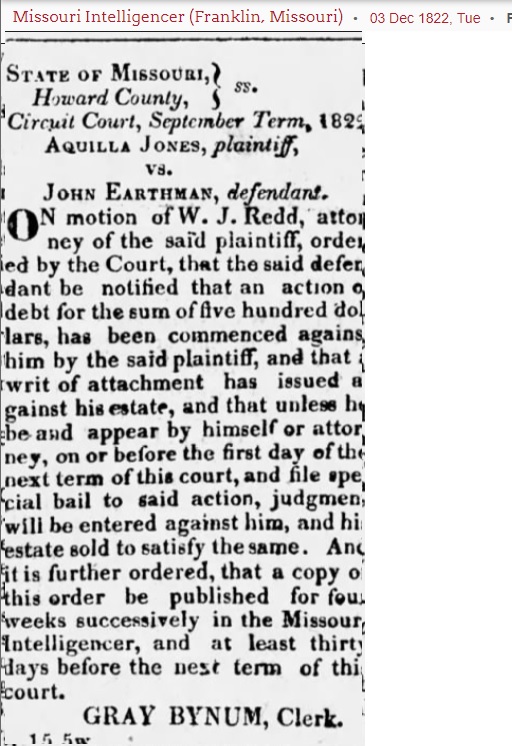 Newspapers can be great ways to learn of court cases. This December 1822 reference to Aquilla Jones from the Franklin, Missouri, Missouri Intellingencer (available in digital format on Newspapers.com) is one such example.

The legal notice suggests that Aquilla is suing John Earthman for $500. The legal notice does not indicate what the suit was over. However the issuance of a writ of attachment indicates that Jones received a judgement in his favor for $500 and that Earthman risks assets being sold to recover that amount.

At the very least there was a business relationship between Jones and Earthman. There may have been a relationship by blood or marriage as well–that can’t be told from this legal notice. The actual court records could detail their relationship (if any) further or it may only reference the judgement and the reason for it.

The case was heard in Howard County, Missouri. I should look for both men in the 1820 census–starting in that county.

The actual court records themselves should be accessed for additional information. It’s not too common for me to actually find a newspaper reference to a court case for a relative in this time frame. $500 was not a small piece of change in 1822.

My search for the actual records will start at the Missouri State Archives in Jefferson City and go from there.