Clues can be anywhere on a document, including an 1893 newspaper notice.

Part of the homestead process was taking “proof” and public notice of that “proof-taking” had to be given. And there had to be “proof” in the homestead application file that notice had been given. That’s the reason for this document.

Normally I don’t pay too much attention to the name of the newspaper publisher, but this time it was noticeable.

The publisher of the paper in which the notice was published was P. A. Troutfetter, son of Christian Troutfetter the homestead applicant. I was already aware of P. A.’ s dabblings in the newspaper industry, but the double reference to the family in this seemingly innocuous document was interesting anyway.

Addison J. Senter was one of Troutfetter’s witnesses to his homestead claim–the names of witnesses had to be published in the paper and others are listed besides Senter. He may be the s

ame A. J. Senter, the notary public who witnessed P. A. Troutfetter’s signature. A. J. Senter signed the form evidencing the publication and also placed his notarial seal on it as well.

It is not often that one of the witnesses is probably listed at the Notary Public on this document either. At this point, I don’t know for certain that Addison J. Senter is the same as A. J. Senter, but it seems a good working initial premise.

Senter’s notarial seal would probably not have been evident on a black and white photocopy of this document. Sometimes more detail is picked up with a digital scan than with other duplication means.

This document was in the completed homestead application of Christ[ian] Troutfetter at the National Archives for property in Thomas County, Kansas. 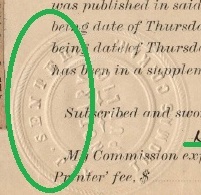