To turn a political phrase into a genealogical one, “it’s the sourcing, stupid.”

The “Montana County Marriages 1865-1950” are online at FamilySearch. It was not much of a problem 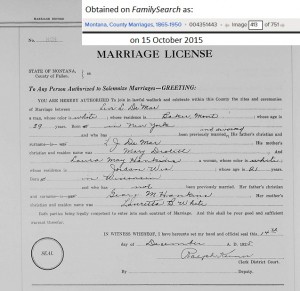 to find the 1925 marriage for Levi Demar in Fallon County. I appreciate the indexes that have been created for these records. It makes it easier to find things.

Where my appreciation turns to frustration is in trying to determine where this record originated so that:

The record for Levi appeared to be a county marriage record (just the license is shown in this post). Typically when using digital images of county records, one can navigate to initial images in order to view the initial frames from the microfilmed copy of the records from which the digital images were made.

These initial microfilm images usually include a spacer with the name of the county, holder of the record, date of filming and name of person who took the images for the microfilm. After that spacer there are usually images of the outside of the book–which include the book volume, name of county, and perhaps the years the book covers. Over thirty years of research I have looked at thousands of these rolls of film. They pretty much all start out that way.

But when I maneuver to the first image for this set of records from Montana, there is no such set of images. There’s just the first page of actual records–along with the apparent left hand side of the microfilmed image which includes the very end of the alphabetical index one typically sees in county marriage records 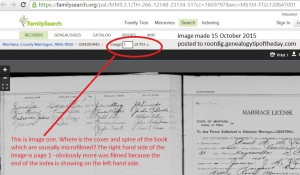 That’s image 1. I can’t go back any further. They d
on’t allow negative image numbers in that little image box. I know. I tried.

These are county marriage records from Fallon County, but that’s all I know. It’s not possible to get the book volume or actual title from the digital images of the microfilm. It would be nice if those earlier pages, particularly the ones with the images identifying the source, were included.

The image screen does provide the microfilm number (1940872), which I search for in the FamilySearch  card catalog. That’s all find and good as it gives me some more specifics about where the image of the marriage record comes from:

That’s better than nothing, but I still don’t know from which volume the 1925 marriage record was taken. And searching for the film number in an attempt to get the information on which actual record book these images were made from seems a little cumbersome. Really cumbersome when one considers that this information was right there on the microfilm all along.

When I cite this source, I’ll indicate that it came from the FamilySearch database of Montana marriages. But it would be nice if I didn’t have to reverse engineer the name of the county office and the volume number.

I’m not trying to be a pain, I’m trying to cite my sources.  I’m glad FamilySearch puts information online for free, but would it really be that difficult to add a few more images to the website for each roll of microfilm?

We’ll see in a future post how Ancestry.com handles this same set of records.