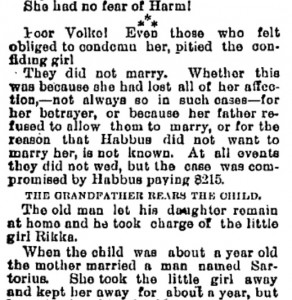 A newspaper today would appear insensitive if it made word plays that poked fun at the names of key characters in a court room drama, but that was not the case in 1892. The Quincy Daily Journal of Friday, February 05, 1892 had a great time with the name of Volke’s beau, Harm Habbus.

Volke Behrens did not marry Harm Habbus. The newspaper indicated that the reason for their failure to marry was not known. Habbus paid Volke’s father, Ulfert Behrens, $215–purportedly for the upkeep of the child. Styled “Rikka” by the newspaper, her name was actually Fredericka Maria, after her grandmother Fredericka Maria Herman (Lichtsinn) Behrens.

According to the newspaper after about a year Volke married a Mr. Sartorius and her daughter Fredericka lived with her and her new husband for about a year.

That’s when things start to change…

Stay tuned….it’s not over yet. (part I is here)