It has been a while since I have actively used materials on Fold3.com. Since that time, they have slightly changed their image download process. Previously one could download all or part of an image to a folder of their own choosing and was prompted for that location during the “save” process. That’s not true any longer as images are automatically placed into a user’s “downloads” folder. One is still able to download all or part of an image and to save those images as either JPG or PDF files. 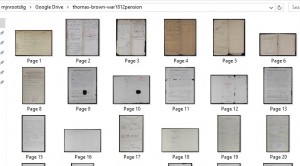 Saving images from Fold3.com in the old days–when you could choose your own folder (after creating a special one) and Fold3.com generated page numbers for you based upon the image within the file.

Earlier file names were automatically created by Fold3.com based solely on the relative number of the image from the record which one was using. This made it easy to save images from a specific pension file into a user-created folder (named for the pensioner with other citation information) and keep track of the images as they were saved, making certain an image had not been overlooked–because they downloaded as “page 1,” “page 2,” “page 3,” etc. I advised people to have the folder where they were downloading the images open during the process so that they could make certain images were not inadvertently being overlooked.

Now the images are automatically dumped in the downloads folder.

The problem is that the file name is generated from the database from where the images are pulled. The file names have more detail now than they did, but there’s still a problem. If I am working in the same database and am saving pension images from several files, I end up with multiple files in my download folder with the same name. Not good.

That’s why there is the “(1)” after the file name in the illustration shown below–I’ve saved images from two different War of 1812 pension files in the downloads folder. The work around is to download from one pension first, make a new folder for the images, and then move the images to that folder and then work from the next pension file. It would be easier to save the files where I wanted to in the fist place.

As for the file names…

If Fold3.com can generate file names with the database title and the relative document number within a certain file (see the Page 3 in the file name), then they should be able to incorporate the pension file number, veteran number or something else into the file name. Personally, the “War_of_1812_Pension_and_Bounty_Land_Warrant_Application_Files” part of the name could be shortened if necessary. A file name with a little more provenance as to where the image was obtained would facilitate my citation process.

It would also enhance my customer experience as a paying customer. Of course, it is duly noted that  Fold3.com is currently the only place to obtain these images online.

One final frustration is that when a pension record is rather large there is no option to download the entire pension record for that individual. Each image has to be downloaded individually one at a time.

Note: the War of 1812 pension files are available for free on  Fold3.com. This criticism is not from someone who has a full blown membership to the site. I encourage readers to use the War of 1812 images, but make certain to take care so that the way the images are saved and stored from Fold3.com does not confuse you later.

If there is a way to change the download location option within Fold3.com to allow me to save where I want to begin with, I would like to know it. I had the same “save to” problem in Chrome and Firefox.