Regular readers know that I encourage those whose relative has obtained a federal land patent to view the entry for that location in the Bureau of Land Management tract books.

The viewing of those books can be a good way to determine if nearby settlers filed claims on the same day as the relative or had claims that were initiated and not completed near the relative. The dates of those claim filings can be good clues as to potential friends, neighbors, and associates. Incomplete claims did not generate land patents (and are not in the BLM index of land patents) and the tract books are one way to locate a reference to an incomplete claim.

I searched for the tract book entry for land patented by David A. Newman in Linn County, Iowa. His patent was received based upon a warrant for military service issued to his father, Augusta Newman. The patent was analyzed in a recent issue of Casefile Clues.

The entry was easy to find. The only problem was that David’s name was not on it. The only reference was to the bounty land warrant received by Augusta Newman. No name was listed. The number of the warrant and the date of the act under which the warrant was issued were all that identified the claimant.

There were two other parcels in an adjacent section (22) that were located on the same day using bounty warrants issued under the same act as Newman’s. In fact, those warrants had consecutive numbers.

Whether or not there is any connection to Newman is not known at this point.

But now I know that names are not always listed. Of course, getting the names would not be difficult as the completed claims would have generated a patent and that patent should appear in the BLM index (http://www.glorecords.blm.gov) and that patent would include the name of the warrantee and the patentee. 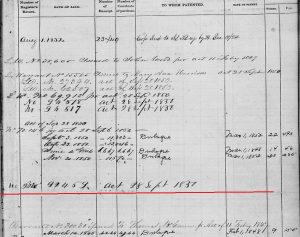