Finding out something about the military career of Heye Albers in Teddy Roosevelt’s “Rough Riders” was not as difficult as one might expect. The Compiled Military Service Record for Heye L. Albers’ 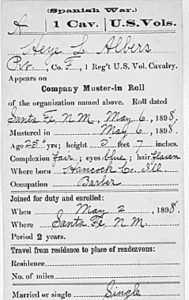 service in Company F of the 1 Regiment United States Volunteer Cavalry is available online at the National Archives website. One card from that record is used as an illustration in this post.

Heye’s place of birth is given as Hancock County, Illinois, and his occupation is listed as a barber. This occupation is in contrast to a newspaper article that indicated he was working as a wagon driver for a steam laundry at the time of his enlistment. It is possible the newspaper or his military record is flat out wrong. It is also possible that he had worked more than one job before his enlistment.

His age is shown as 25 years 6 months as of May 1898 which is consistent with the precise date of birth of 2 November 1872 given in the newspaper article. That consistency does not prove the precise date is correct.