You have not won the genealogy game because there is no such thing. Family history research is not a contest to see who can get a lineage back the furthest. It is not a game to see who can get the names of their direct ancestors. They don’t give out little prizes to the person who cite sources without reference to Evidence Explained. 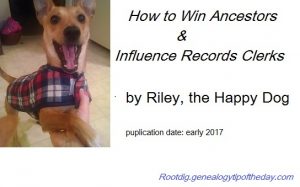 Genealogy is about conscientiously and to the best of your ability attempting to document your ancestors’ stories as accurately and as faithfully as you can. It is about improving your skills when necessary so that your research reflects the spirit of the records that have been left behind. That’s not always an easy task.

Some of us descend from 19th-century Irish immigrants who can be difficult to trace. Some of us descend from peasants from other areas of Europe where there are similar research challenges. Others have great-grandparents who were adopted or born out-of-wedlock. Those individuals often have lineage problems that are insurmountable.

It’s about the research and the faithful reconstruction of your ancestor’s life.

Unless you successfully trace a Brown or Smith family back ten generations. We might need a prize for that.