Sound genealogy methodology as espoused in the Board for Certification of Genealogists’ Genealogical Standards Manual indicates that an exhaustive search be conducted. What qualifies as an exhaustive search generally depends on the problem being solved. In this case, I really didn’t have a problem specifically. Sometimes I am simply curious and just like to find everything I can. That’s true even when I already have several good independent reliable sources because one never knows what little extra items one will encounter.

The probate case file of Henry Goldenstein is one of those situations. I really didn’t expect it to yield any “new” information and I already had original sources with primary information regarding his date and place of death. As we’ve been seeing in other posts, his manner of death in Kansas City, Missouri, in July of 1921 is a separate matter entirely. There was a slight chance that his Illinois probate referenced property or an estate settlement in Missouri. The probate case file for him opened in the Adams County, Illinois, Circuit Court was done because that’s where virtually all his family was living at the time of his death and where he had lived before he ventured to Kansas City. He really had not lived long enough in Kansas City to warrant a probate case being initiated there.

The only real asset listed is a 1919 automobile and one set of clothes. He owed his mother a total of $900 she had apparently lent him before his trip to Kansas City. His estate also ended up owing her for his funeral expenses. There actually was not enough in his estate to pay her the entire amount she was owed, but she did receive the balance in the estate after a few minor legal fees were paid. There were no clues in his probate regarding the investigation into his death. There is no mention of the investigation that took place into his death after his body was returned to Illinois.

But there was one really interesting “order of appearance” from his heirs. Because Henry had no wife or any descendants, his mother and his siblings were his heirs. They all signed off on that order of appearance. Why it took until 1927 to finally settle up his estate, I’m not certain. 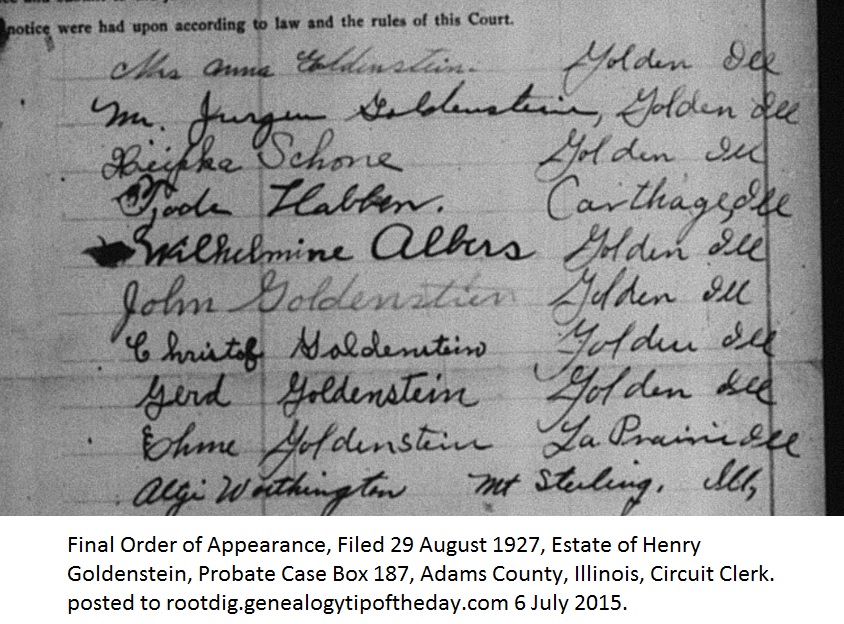 My great-grandmother Tjode Habben has signed the document along with all her siblings–and her mother, Mrs. Anna Goldenstein. For reasons that aren’t germane to this post, her brother Chris, who styled himself as Christof in this document, used the last name of Ehmen and at least two of her brothers used the last name of Golden. However as of this point in time they were all apparently still using the name of Goldenstein.

So besides a lovely image of all their signatures, I know that at least in 1927 they were all using Goldenstein as their last name. Or at least they signed Goldenstein on this document. That might have been easier than explaining why they all had the same set of parents and yet there were three different surnames for the sons.