I’ve been in the Hancock County Courthouse in Carthage, Illinois numerous times over the past thirty-five years.
It is a beautiful building and is well-maintained by the County Board. It’s the third courthouse the county has had and was constructed in the early 20th century. I really had not given much thought to the construction of the courthouse until I was reviewing references to members of the Trautvetter family in the Warsaw Bulletin, published in Warsaw, Illinois.

I almost did not even look at the reference to Theodore in 1903. There are hundreds of references to the Trautvetter name in the Warsaw newspapers from the earliest publication in the 1850s until the mid-20th century and going through all of them will take some time. But this one caught my eye as  the title “Court House Meeting in Wythe” seemed a little bit unusual. I was hoping it was more interesting than the usual gossip column mention of “who came over to whose home for dinner.” It was.

When I read the article, the title made perfect sense: residents of Wythe Township were organizing in protest to the construction of a new courthouse in the county seat.

My uncle Theodore Trautvetter was none too happy about the new courthouse and the fact that the county seat was remaining in Carthage. He was made chairman of a group in Wythe Township who opposed the construction of the courthouse. The Warsaw Bulletin mentions the meeting in January of 1903 where the prevailing sentiment was “fight the scheme.” That’s just one of several derogatory terms used to describe the county board’s attempt to construct a new building without putting it to a vote of all county residents. 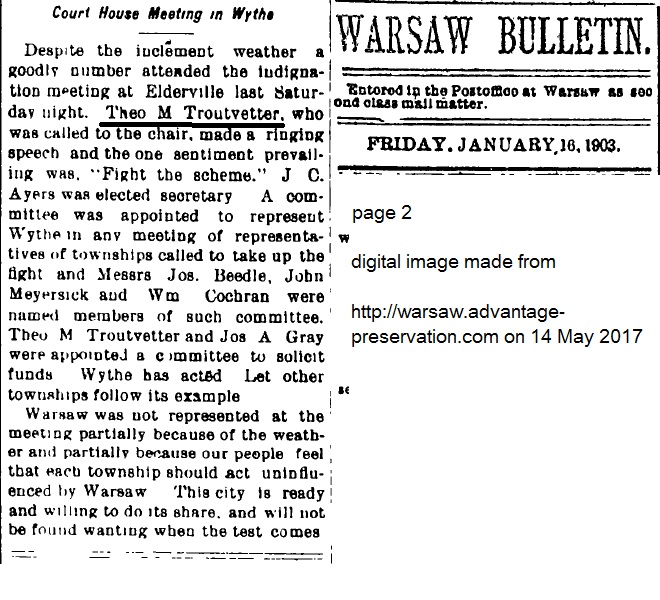 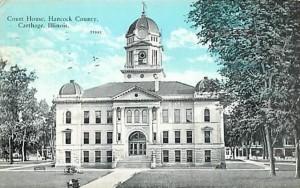 From editorial statements made in other parts of the same issue, the newspaper was decidedly not in favor of a new courthouse being built in Carthage (that’s something of an understatement to be honest) and referred to the actions of the county board as a “scheme” and suggested that the matter should be put to a vote of the entire county.

The courthouse was built despite objections of residents in other parts of the county.

We’ll have a follow up as Theodore was not the only Trautvetter who was opposed to the construction project.