I’m still sifting through materials on Jacob Baker (father-in-law of my ancestor Benjamin Butler’s probable brother Arvin and mentioned in an earlier post “My Uncle’s Father-in-Law Got a War of 1812 Pension and Why It Matters“) in hopes of ferreting out some details that could help me in my search for more information on Benjamin. Readers may remember that Benjamin (born about 1820 in New York State) spent some time in Ontario and that’s where I think he probably married. Arvin and Benjamin apparently both lived in Ontario and since I really can’t find anything on Benjamin to help me, I’m hoping something on Arvin (or his father-in-law) may provide some locations I can use to search.

Until everything’s indexed and on the internet, it’s what we need to do.

But there’s more reason to do it than just that. Tracking the extended kin of Benjamin helps me to make certain I have the right Benjamin Butler.

And so our work on Jacob Baker continues. Apparently he had difficulties getting his War of 1812 pension. Those difficulties were bad enough that a special act was passed to grant him his pension. 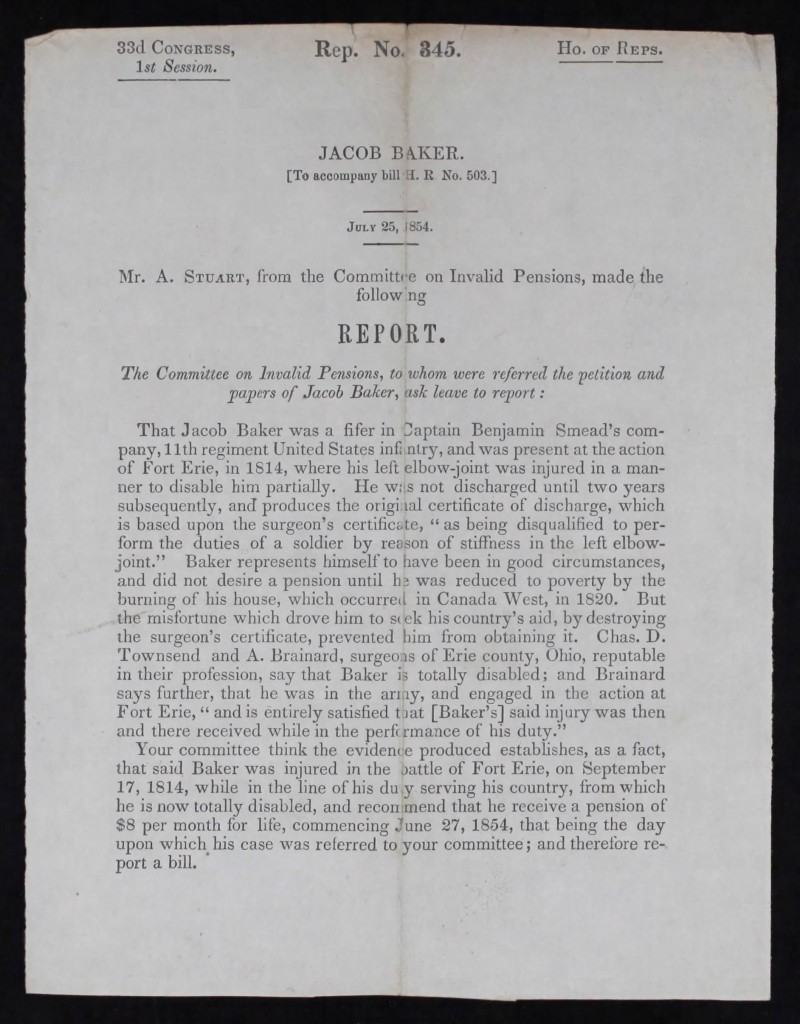 Jacob has an extensive War of 1812 pension file (available digitally on Fold3.com [currently for free]

) and the printed copy of the report was contained in his pension file. The bill was passed and Jacob was granted his pension. Because legislation was passed specifically to allow for his pension, there may be additional paperwork on Jacob in the Center for Legislative Archives. How much there is in this case is questionable given the size of Jacob Baker’s pension file. But we have a copy on order and will update when copies have been obtained. Those materials are not online. This is the first War of 1812 pensioner in which I have an interest who had an act passed for him.