I’ve searched for my mother’s immigrant ancestors in passenger manifests for over thirty years. All of her families immigrated to the United States from Ostfriesland, Germany between the 1850s and 1883. Most of them have been found on passengers lists arriving through either New York or New Orleans.

Today I think I’ve located another one: Bernard Dirks. Bernard was a native of Etzel, Ostfriesland, Germany who settled near Coatsburg in Adams County, Illinois, where he died in the 1910s. I really didn’t “need” his passenger list, as his origins in Germany have been well documented. But it was a missing piece of the puzzle and one never knows what additional information may surface on a manifest.

Bernard’s two census enumerations where immigration information is provided both indicate an arrival year of 1852:

The consistency suggests that the same person provided the same information–it’s not a guarantee that the year is correct. But at least the years are consistent. 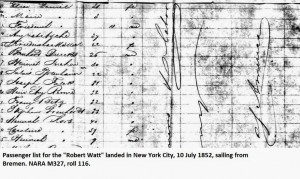 After some additional time spent with wildcard searching at Ancestry.com I discovered a “Bernard Dirks” having arrived in New York in July of 1852. This was the only reasonably close match that I was able to locate performing a wildcard search with vowels replaced by wildcard operators.

The “Bernard Dirks” on this entry is aged 26 which implies a year of birth of approximately 1826. The known Bernard Dirks was born 9 September 1825 in Etzel, Germany.
Family tradition (from Altje Goldenstein Worthington, grand-daughter of Bernard) was that he landed in New York, worked there a few years and came to Illinois. I am uncertain of how true that actually is and the reality may have been he immigrated, worked a few years and got married. Sometimes it is difficult to tell with family traditions just which portions are true and which ones are not. Very few Ostfriesens spent time in New York State upon immigrating during the time period that Bernard arrived and New York State was not a typical destination for Ostfriesen immigrants to the United States.

I’m as certain as I can be at this point that this is the entry for “my Bernard.” It is known that he immigrated before he married in December of 1856 in Adams County, Illinois and, to date, no relatives of his have been located in the United States so his arriving without other Dirkses isn’t unusual.