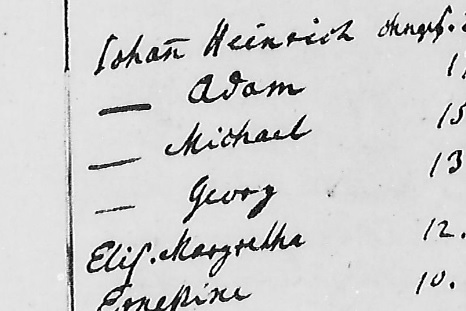 Erasmus and Anna Catharina (Gross) Trautvetter had the following children born in Dorf Allendorf (Bad Salzungen), Thuringia, Germany, between 1791 and 1811:

Those are the names in their baptismal records. All eight children survived to adulthood.  The sons were all born before the daughters–that’s German organization for you.

Now I have to decide how to refer to them when I write about them. As researchers with ancestors from parts of Germany know, this family did not have four sons they all called “Johann”–something I’ve written about before. That would be too confusing and was not the intention of this practice. The four Johanns were most likely referred to by their second name. That name is often referred to as their “call name.” The Johann is symbolic–at least in this situation.

For years I have written about child number four, referring to him as George. I used George because that’s the name he used in the United States and for some time that was the only name I had for him. I did not know about the name given in his baptismal record. Do I now go back and change everything to Johann Georg?

And what name should I use for the others?

Before any discussion of names even starts, I am taking about what name I use for someone when generically writing about them. Any transcription of a record should render the name as faithfully as possible to the original. Documents should never be changed. It’s when I write about these people that I need to decide a way to handle their name.

I realize that there’s probably a “preferred” way to handle this to be “genealogically correct,” but frankly I’m not too worried about what that way is. I prefer to refer to people when writing about them by the name that they (for the most part used). Sometimes that is easy to ascertain and sometimes it is not.

For those reasons, I refer to the brothers all by their second name when writing about them. The transcription of their baptismal record has been rendered faithfully to that document–just like one should with any document.

Ernestine is not a problem in this case. She had no additional names. She also only appears in one United States record and was dead an undetermined amount of time when that reference was made. She is referred to as Ernestine in my discussions.

Wilhelmine has no other names. However she signs her name as “Mine” in the few documents that she did sign. I’m on the fence in what name to use when referring to her.

Elisabeth Margretha and Elisabeth Magdalene have only been located in a handful of records in Wohlmuthausen. They are consistently referred to by both names in those records. For now, that is the name I am using to refer to each one.

And I’m keeping notes of why I use the names I do when referring to people.