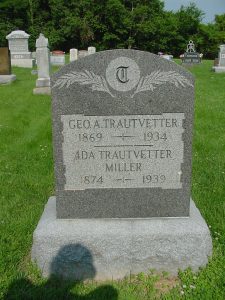 My favorite picture of the tombstone of my great-grandparents has my shadow across the bottom. Several years ago I was taken to task for including it in a post. “You really should not have your shadow in the picture” was what I was told. “It is bad form.”

I like the shadow in the picture and I have no intention of taking a “better” picture without the shadow. And if I missed lecture on “bad form,” I’m not running out to go and listen to it.

The shadow does not impact the legibility of the text of the stone. While I’m not one given to sentimentality, I like the fact that the shadow connects me to the stone in some way. I’ve made my mark on the stone without physically interacting with the stone or harming it.

And the shadow marks the image as one that I took. Years ago the same picture “showed up” by osmosis on FindAGrave. I didn’t care that the picture was used as much as I was bothered by the fact that someone chose not to credit me for the picture.* I would have graciously given permission–I just wanted them to indicate where they got the picture. They really could not say their shadow was the one on the stone (you can make out the bill of my farmer’s hat in the image). They would have had to have been standing at the same distance from the stone at the same time of day and hunched over as I slightly was. They would not have had to have worn the same hat <grin>.

After I saw this picture, I stopped worrying if my shadow was on the stone–unless it impacted the readability of the stone. It’s like I made my own annotation on the image. And it’s not a big deal. Really.

*–I realize others do not care if people use their photographs without asking. That is their  prerogative and their own business. I am not one of those people.