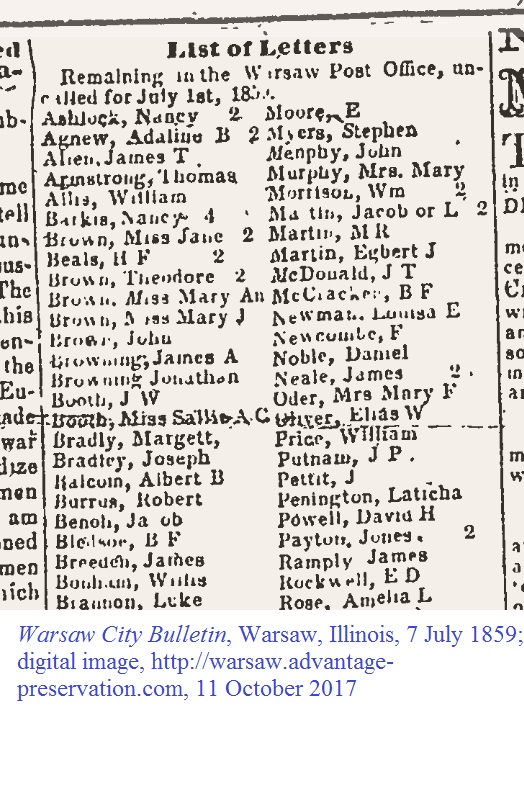 James Rampley had a letter waiting for him in the Warsaw, Illinois, post office in July of 1859.

Whether these references are significant clues really depends upon the individual situation. James is reasonably well-documented in Hancock County–I know about when he arrived, when he bought and sold land, where he is in every census, where and when he died, and where he is buried. In other families, a reference like this could be a significant clue. For individuals who died in Illinois during this time period (there are no civil death records), a reference on the mail list could provide evidence that someone thought they were alive and send them a letter to a specific post office. On this list the women are all named specifically. They are not listed as Mrs. Husbandfirstname Husbandlastname.

There was one thing the reference told me:

where James got his mail

That is something I had never really given any thought to. I expected it would have been a 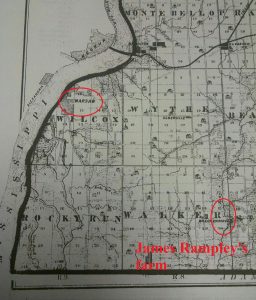 post office closer to his home/farm in the eastern part of Walker Township. The trip to Warsaw would have been a good ten miles for James to make. There were small towns closer to him than Warsaw that I would have thought would have had a post office.

But since I’ve never looked to see where the post offices were in Hancock County in 1859, I cannot say for certain. The National Archives does have records of post offices that could help me determine if others were closer to James.

The reference did remind me that I might have to expand my search for “post office letters” in some cases further than I originally thought. Sometimes they are helpful in establishing residence in an area.