Federal, state, and local government reports can contain a wide variety of information, particularly through the early 20th century. Often these published reports include information that would be considered too private to be published today.  A 19th century report from Illinois is one of those books.

The 1892 Reports to the Illinois General Assembly (available on GoogleBooks) contains several interesting items–including a list of everyone who attended the “Illinois Institution for the Education of the Deaf and Dumb” between 26 January 1846 and 30 September 1886. There’s even some information about each student in the report. 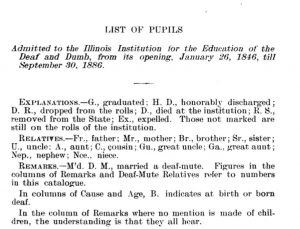 The birth year of 1866 appears to be a typographical error. Sarah’s tombstone in the West Point, Hancock County, Illinois, cemetery indicates that she was born in 1874 and that year is consistent with census enumerations for Sarah.

The report indicated several things about attendees of the school:

The report was located on GoogleBooks  by searching for “sarah rampley deaf.” Searching by names and some location details can also be a good way to find ancestral references in such materials. Remember that the search terms have to be in the published item–so be creative. The report included quite a bit of other information about the school (including a list of employees) which would be of interest to anyone who had a relative attend during the time period in question.

Sarah is another “non-famous” person whose name appears on the printed page. Don’t assume that published materials only make note of the well-heeled. They don’t.