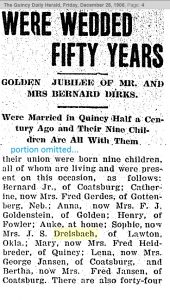 Sometimes it can be tedious going through all the newspaper references for a relative. There are times when it can be worth the effort.

I don’t really know too much about Sophia (Dirks) Driesbach, my great-grandmother’s aunt. Sophia and her husband had no children and she died in her mid-forties in Coatsburg, Adams County, Illinois, where she was born in 1868. Her husband left the area and moved to Oklahoma where he died in the 1940s. He was not returned to Illinois for burial. 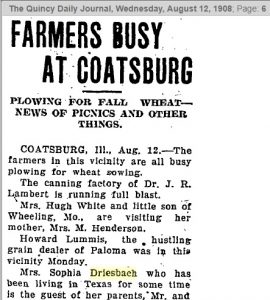 Had it not been for a variety of newspaper references I would have had fewer clues about the last eight years of her life. A newspaper article about her parents’ fiftieth wedding anniversary in December of 1906 indicated she and her husband were living in Lawton, Oklahoma. It was to be one of the first in a series of newspaper references to Sophia and her husband. She is listed as having attended the celebration for her parents and there are pictures of her with her siblings (along with their parents) that were taken at the time. So I know she actually made the return trip home to visit.

She returned again to visit her parents in August of 1908 (apparently by herself). This reference indicated that she had been living in Texas “for some time.” This is the only reference located that indicated she ever lived in Texas. By 1911 the Driesbachs had returned to Illinois. 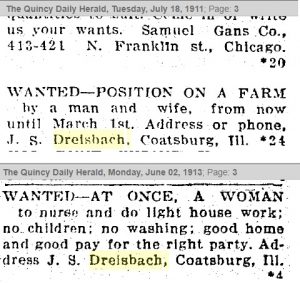 In the summer of 1911, an ad in the Quincy Daily Herald appeared stating that an employment position was wanted on a farm “by a man and wife, from now until March 1st” with a contact of J. S. Dreisbach of Coatsburg. The ad appeared in the paper for several weeks. 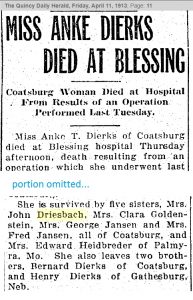 In April of 1912, Sophia’s unmarried sister, Anke, died. Anke’s obituary listed all her siblings as survivors, including a Mrs. John Driesbach of Coatsburg. When Sophia herself died two years later, it is stated that she had become bedfast around January of 1913. Her father Bernard Dirks died in March of 1913 and his obituary in the Quincy Daily Herald indicated that Sophia was living in Lawton, Oklahoma, at that time. If all the newspaper references are correct, Sophia became ill while the couple lived in Oklahoma. It’s possible that the death of Sophia’s father, coupled with her own illness, caused she and her husband to return to Illinois.

In June of 1913, J. S. Dreisbach of Coatsburg, Illinois,  advertised in the Quincy Daily Herald for a woman to nurse and do light housework in his home. The advertisement mentions that no children are in the household. It would appear that the nurse would be caring for Sophia. 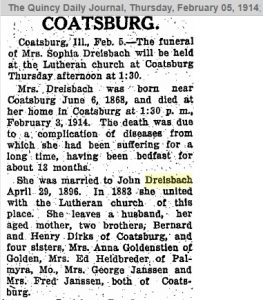 That following winter, Sophia passed away. She died at her home in Coatsburg in February of 1914. Neither her obituary or her death notice in the “Coatsburg” section of the Quincy Daily Journal of 5 February 1914 mentions any other residence for her other than Coatsburg.

The Quincy, Illinois, newspapers may only tell part of the story and were searched initially because they were available online in digital format. Quincy is the Adams County seat and weekly newspapers in Coatsburg and the nearby area may provide additional details or references to Sophia and her husband. Research should not focus solely on one newspaper or only newspapers. Probate records for Sophia’s father, her sister, and possibly Sophia herself may shed additional light on the last years of her life.