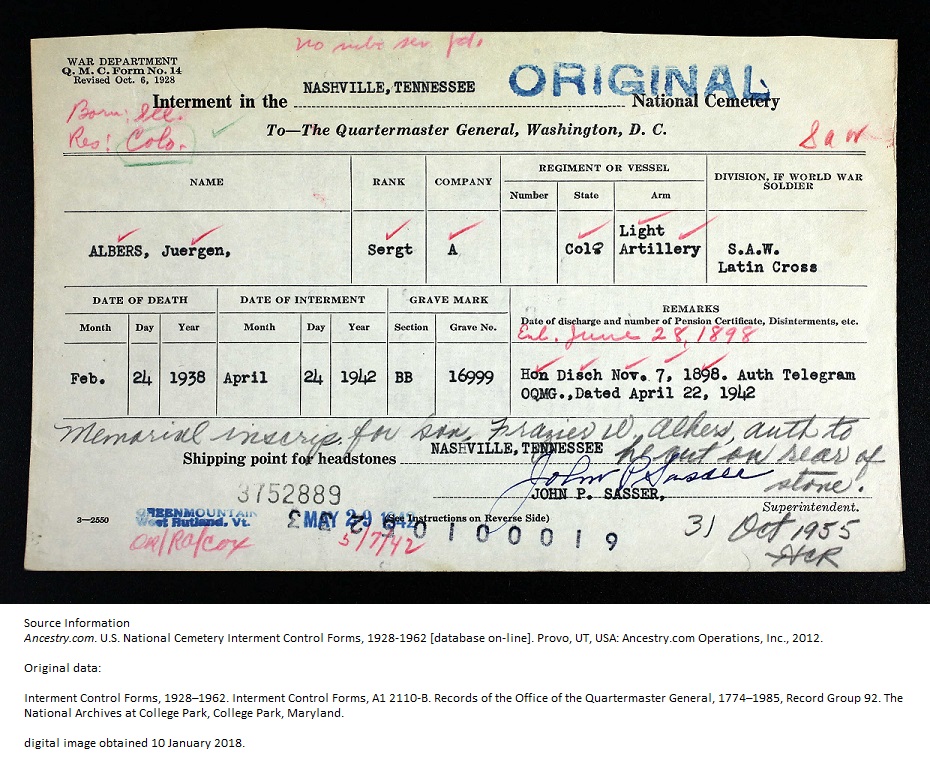 This card for Juergen Albers appears in Ancestry.com’s “U.S. National Cemetery Interment Control Forms, 1928-1962“.  The card is full of information about Jurgen, his military career, his burial, and–interestingly–his son.

The card appears to have been written on by several people:

The red pencil writer apparently fact-checked information from other sources and apparently did that fact-checking in May of 1942.

There are also control numbers of some sort stamped on the card as well.

The information about Albers service is necessarily secondary given the nature of this card–it was apparently compiled in 1942. That doesn’t mean the information is wrong, just that it was copied from somewhere. Jurgen served in the Spanish-American War and was a sergeant in Company A of the Colorado Light Artillery. He enlisted in June of 1898 and was discharged in November of that same year.  The card also indicated that he was born in Illinois and lived (“Res”) in Colorado.

Jurgen died on 24 February 1938 and was interred in Nashville’s National Cemetery on 24 April 1942. Where was his body in the interim? And what was special (if anything) about April of 1942 to cause his body to be interred then–four years after his death?

We will have an update in a future post. This image was obtained in Ancestry.com’s “U.S. National Cemetery Interment Control Forms, 1928-1962“.  That database is different from databases that contain information on military tombstones that were to be erected on the graves of soldiers buried in non-military cemeteries.